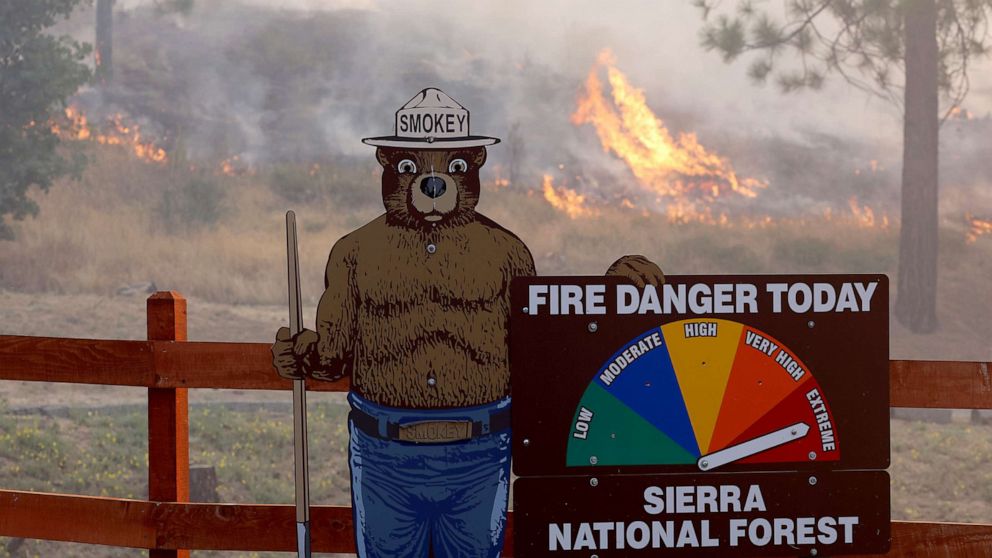 (MARIPOSA COUNTY, Calif.) — A bone-dry environment combined with scorching temperatures and ample fuel — all consequences of climate change — is what allowed the Oak Fire to spread so rapidly from the moment of ignition, scientists tell ABC News.

The Oak Fire spread to more than 15,000 acres within two days of it sparking in Mariposa County near Yosemite National Park in California, destroying structures and prompting evacuations of nearby residents. After the weekend, the wildfire unfurled at a less rapid pace — accumulating to more than 18,000 acres by Tuesday afternoon.

But the conditions that allowed the fire to detonate at such swift speeds remain, and are just a spark away from wreaking more havoc on the region.

A heat wave that brought triple-digit temperatures for multiple days in succession combined with extremely low humidity contributed to extremely dry fuels, consisting of dead leaves and trees, that accumulated on the ground and allowed the Oak Fire to advance, Marshall Burke, an associate professor of Earth system science at Stanford University, told ABC News.

“Right as [the Oak Fire] started, there was a period of very, very low relative humidity levels in California,” Burke said. “And I think that really contributed to drying out fuels and making this just a combustible scenario in which fires are gonna spread quickly.”

The humidity hovered between 5% and 10% at the time the Oak Fire gained traction, according to Cal Fire. The dry fuel, leftover from a mass tree fatality event from 2012 to 2016, as well as insect damage to the remaining trees, helped take the Oak Fire from “seasonal levels” to “astronomical levels,” John Abatzoglou, a climate scientist and associate professor of the management of complex systems at the University of California at Merced, told ABC News.

In addition, the rugged terrain is making it difficult for the firefighters to access the land to create fire breaks, Kristina Dahl, senior climate scientist at the Union of Concerned Scientists, told ABC News.

When the fire began, it “grew in all directions” and unusually, without the help of a high wind event, Burke said. While fires tend to grow uphill, this Oak Fire spread both uphill and downhill, making it less predictable and harder to contain, Dahl said.

Ironically, the growth of the Oak Fire began to slow on Monday as it started to run into fire scars from previous large fires, including the Ferguson Fire, which burned in the same region in 2018, Burke said.

That slowdown is further proof that fire management, including the prescribed burns that were put out of practice for more than a century, are integral to preventing large wildfires from occurring — especially as climate change conditions continue to warm the planet and create scenarios for devastating wildfires to wreak havoc on communities and nature, Dahl said.

“This ecosystem, which really is a fire-dependent ecosystem, hasn’t been able to experience these lower-intensity burns that would have cleared out some of the smaller vegetation,” Dahl said. “So we have this buildup of fuel, and we have these drought conditions that really dry out that vegetation. So that’s enabling this fire behavior to get much more extreme.”

The current atmospheric conditions exacerbated the effects of a 22-year megadrought that is continuing to intensify in the West and is beginning to spread eastward. California saw the driest start to the calendar year in recorded history, since 1895, Abatzoglou said.

“When you combine those things, that creates this set of conditions in which really rapid growth of fires is favored,” Dahl said.

The wildfire caused California Gov. Gavin Newsom to declare a state of emergency for Mariposa County.

The Oak Fire sparked as the National Park Service planned to reopen the southern entrance of Yosemite as firefighters gained traction on containing the Washburn Fire — the wildfire that had been threatening the park’s iconic grove of giant sequoia trees in the weeks prior.

Thousands of firefighters had contained 26% of the Oak Fire by Tuesday morning, according to Cal Fire. An expected increase in humidity should also help to temper the wildfire.

California had a “benign” month of fire activity in June that turned into a “scorcher” in July, Abatzoglou said. Because of the relatively low fire activity, the state had the resources to devote to the Oak Fire to get it under control as quickly as possible, he added.

Climate change is expected to make wildfires worse around California and the globe, Dahl said.

“We know that climate change is increasing the area that burns during fires. It’s increasing the length of fire season. It’s contributing to extreme drought conditions out here in the West that then cause the vegetation to dry out so that it’s really just a tinderbox out here,” Dal said. “So as climate change progresses, we anticipate fires like this one to continue to happen with greater frequency and burn larger areas.”