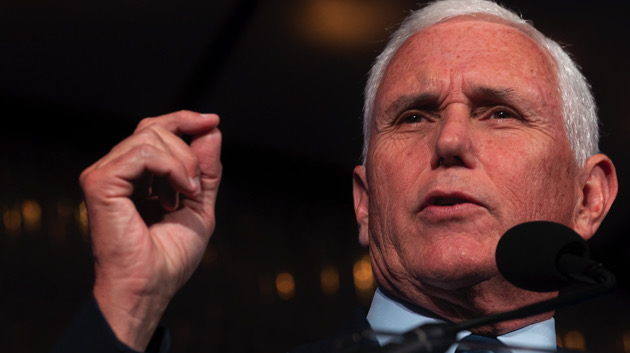 (WASHINGTON) — In another break from his one-time boss, former Vice President Mike Pence said Tuesday in Washington that while he and Donald Trump may not differ on conservative ideology they “may differ on focus” — and Pence said he wouldn’t be stuck in the past.

“I don’t know that our movement is that divided. I don’t know that the president and I differ on issues. But we may differ on focus. I truly do believe that elections are about the future,” he said at the Young America’s Foundation student conference, about a mile away from where Trump was slated to speak at another event later Tuesday.

Trump’s appearance marks his return to the nation’s capital for the first time since leaving office in the shadow of the Jan. 6 insurrection. His and Pence’s remarks offered another split-screen for the onetime GOP ticket — and possible 2024 competitors — who became estranged in the wake of the Capitol riot.

The former vice president made his comments about Trump in response to a student at the conference who asked about Trump’s upcoming speech. The student asked about the divide between the two on their outlook for the future of the conservative movement.

“[It] is absolutely essential at a time when so many Americans are hurting, so many families are struggling, that we don’t give away to the temptation to look back,” Pence said.

“But I think the time has come for us to offer a bold, positive agenda to bring America back,” he said. “And I’ll continue to carry that message all across this nation.”

Pence has been increasingly vocal about his select differences with Trump — in particular his refusal to try and overturn the 2020 election results — while also stressing their work together in the White House to advance a conservative agenda.

He had been slated to get a one-day head start on unveiling his Republican agenda ahead of Trump’s return, but a Monday night speech for the Heritage Foundation, a conservative think tank, was canceled due to weather.

“My plane was diverted against that terrible storm you’ve all witnessed. And I just figured with [my wife] Karen by my side that God must have had different plans for today,” Pence said on Tuesday.

“In fact, he must have decided that a talk about the future … should be given to the rising generation.”

Pence, Trump’s loyal No. 2 while in office, has repeatedly split with him in making endorsements in state races this year, with both seeking to make their mark on the party leading up to the midterms.

Most recently, in the Republican gubernatorial primary in Arizona, Pence has campaigned with current Gov. Doug Ducey and GOP secretary of state candidate Beau Lane on behalf of Karrin Taylor Robson while Trump hosted a rally across the state with his chosen candidate, former TV journalist Kari Lake.

Pence’s Young America’s Foundation speech on Tuesday detailed his “Freedom Agenda,” which includes banning abortions, finishing the southern border wall, focusing on China as an economic threat and protecting the Second Amendment, among other GOP policies.

“Some people may choose to focus on the past. But elections are about the future. And I believe conservatives must focus on the future to win back America,” Pence said.

“The conservative movement has always been built on the notion that ideas have consequences,” he said. “Conservative conservatism is bigger than any one moment, any one election or any one person.”

Ahead of Pence’s later-canceled speech on Monday, the Democratic National Committee released a statement criticizing his platform.

“We don’t have to imagine what’s on the Mike Pence agenda — he’s already told us as he’s brought his extreme road show across the country,” DNC spokesman Ammar Moussa said in a statement.

Pence spent much of his hourlong speech recounting his work as vice president, including on the southern border, appointing more than 300 conservative judges to federal courts and building up the military.

Shortly after his remarks, Pence announced new details about his forthcoming memoir “So Help Me God,” scheduled for release on Nov. 15, which will chronicle “President Trump’s severing of their relationship on January 6, 2021 when Pence kept his oath to the Constitution.”