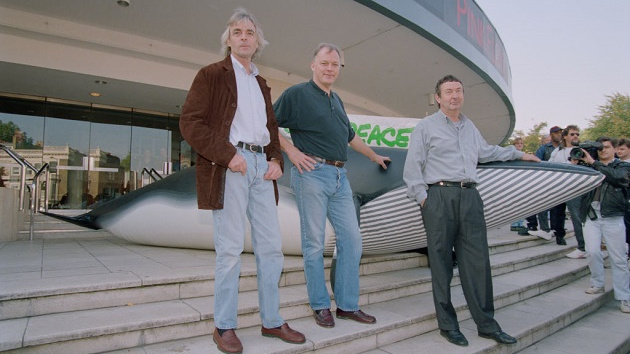 Pink Floyd has debuted an official video for the recently reworked version of the band’s 1994 song “A Great Day for Freedom,” which was released recently digitally and as the B-side of the physical version of the group’s new single, “Hey Hey Rise Up.”

The video, which you can watch at Pink Floyd’s official YouTube channel, features newly edited footage of the band performing during rehearsals for its two-week run of shows at Earl’s Court in London in 1994.

“A Great Day for Freedom” originally appeared on Pink Floyd’s 1994 album The Division Bell. The song’s music was composed by Gilmour, with lyrics co-written by David and wife Polly Samson.

The tune reflects with uncertainty about the future of Eastern Europe following the Berlin Wall being torn down, and Gilmour felt the song served as a good companion for “Hey Hey Rise Up,” which was inspired by Russia’s current invasion of Ukraine.

As previously reported, the “Hey Hey Rise Up” single featuring the updated “A Great Day for Freedom” is available now in most countries on CD and as a seven-inch vinyl disc, but won’t be released in those formats in North America and Australia until October 21.

In other news, a 2018 remix of Pink Floyd’s “Dogs,” from the upcoming reissue the band’s 1977 album Animals, has been released as an advance track via digital formats and posted at the band’s YouTube channel. The Animals reissue is due out September 16.