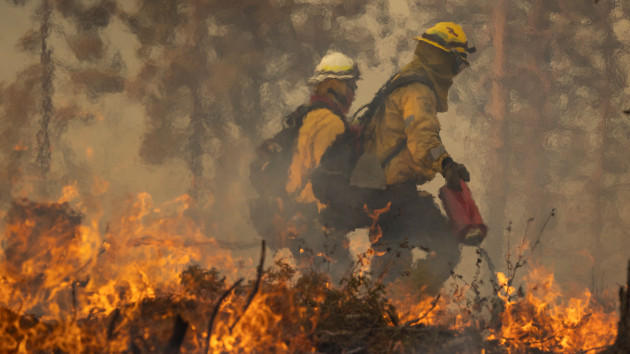 The Oak Fire burning in Mariposa County, which has prompted the evacuation of more than 6,000 people, went from zero containment on Sunday to 10% containment on Monday as more than 2,000 firefighters battling the blaze made progress overnight, according to Cal Fire.

“Fire activity was not as extreme as it has been in previous days. Firefighters made good headway,” Cal Fire said in an updated incident report released Monday morning.

Despite being challenged by rugged terrain and temperatures ranging from the high 90s to 100 degrees, firefighters managed to save the small community of Mariposa Pines, on the north edge of the fire, according to Cal Fire.

The blaze made a “hard push” Sunday evening in the direction of Mariposa Pines, which has a population of nearly 300 people, according to Cal Fire. Three firefighting strike teams managed to prevent flames from jumping a road and spreading into the Sierra Nevada mountains community, Cal Fire officials said.

Firefighters were also making progress on the east and south sides of the fire, officials said. The northeast side of the blaze, according to Cal Fire, was moving into an area where there are burn scars left by the 2018 Ferguson Fire, which charred nearly 97,000 acres.

Severe drought conditions has left large pockets of dried out vegetation, helping to fuel the quick-moving blaze, fire officials said. The Oak Fire is now the largest fire to erupt in the state this year.

The fire started around 2 p.m. Friday near the Mariposa County town of Midpines, Cal Fire said. The cause of the fire is under investigation.

California Gov. Gavin Newsom declared a state of emergency for Mariposa County over the weekend and his office announced the state has secured a Fire Management Assistance Grant from the Federal Emergency Management Agency to help provide resources as it responds to the blaze.

The fire has destroyed or damaged at least 15 structures, according to Cal Fire. A preliminary damage estimate by Cal Fire found that at least seven homes in Mariposa County have been destroyed.

No deaths or serious injuries have been reported.

Among the residents who were evacuated were newlyweds Steve and Andrea Ward. The couple returned to their home on Sunday to find it nearly burned to the ground, but took solace in parts of the structure still standing, including a wooden arch in front of their home where they exchanged wedding vows.

“Just to see that space, I honestly thought it was going to be burnt to the ground. I’m surprised it’s still standing,” Andrea Ward told ABC station KFSN-TV in Fresno, California.

The couple said they not only plan to rebuild their home, but vowed to pitch in and rebuild their community. Steve Ward said the devastation has made their bonds with the community and their love for each other stronger.

“If I gotta prioritize keeping her safe versus keeping the house safe, I’m gonna take her,” Steve Ward said of his wife.

Smoke from the Oak Fire is expected to drift into parts of the San Francisco Bay Area nearly 200 miles away and affect air quality, according to the Bay Area Air Quality Management District.

This is the third wildfire to burn in Mariposa County over the past two weeks.

The cause of the Washburn Fire remains under investigation.

The smaller Agua Fire, which started on July 18, is now fully contained after burning some 420 acres. The fire was caused by a car, officials said.