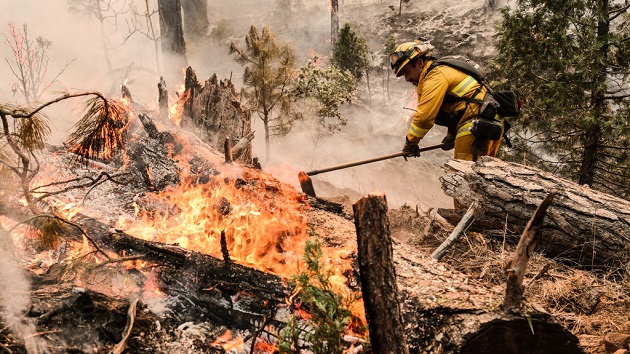 (MARIPOSA, Calif.) — California Gov. Gavin Newsom declared a state of emergency for Mariposa County as hundreds of firefighters are battling a fast-moving fire burning near Yosemite National Park that remained out of control on Sunday.

The Oak Fire ignited Friday afternoon and has exploded to 14,281 acres as of Sunday morning, according to state fire officials. The fire is currently 0% contained.

“The fire remained active through the night moving toward the communities of Jerseydale, Darrah, and Bootjack,” Cal Fire said in its incident report Sunday.

The low humidity, which is between 5% and 10%, is expected to “hamper firefighting efforts,” according to Cal Fire.

Fueled by winds and 100-degree temperatures, the fire “grew significantly” between Saturday night and Sunday morning as flames crept further into the Sierra National Forest just south of Yosemite, according to Cal Fire.

Cal Fire Battalion Chief Jon Heggie took ABC News on a tour of the edge of the blaze and noted large patches of dried out vegetation that had not yet burned to illustrate the type of terrain on fire and producing high-intensity heat, saying, “this is what we’re dealing with throughout this whole incident.”

“It really is a challenge because the amount of heat that’s in this fuel. It makes it challenging to our firefighters to fight these fires,” Heggie said.

The fire started around 2 p.m. Friday near the Mariposa County town of Midpines, Cal Fire said. The cause of the fire is under investigation.

Newsom’s office said Saturday that the state has secured a Fire Management Assistance Grant from the Federal Emergency Management Agency to help provide resources as it responds to the “rapidly-moving fire.”

More than 90% of Mariposa County has exceptional drought conditions, which can provide ample dry brush to fuel the fire. Hot, dry weather has also helped drive the blaze.

This is the third wildfire to burn in the county over the past two weeks.

The Washburn Fire, which started on July 7 near the southern entrance of Yosemite National Park, is 79% contained after burning over 4,800 acres.

The containment of the fire, which at one point was inching dangerously close to the park’s large sequoia grove Mariposa Grove, allowed the southern entrance of the park to open Saturday morning.

The smaller Agua Fire, which started on July 18, is now fully contained after burning some 420 acres. The fire was caused by a car, officials said.