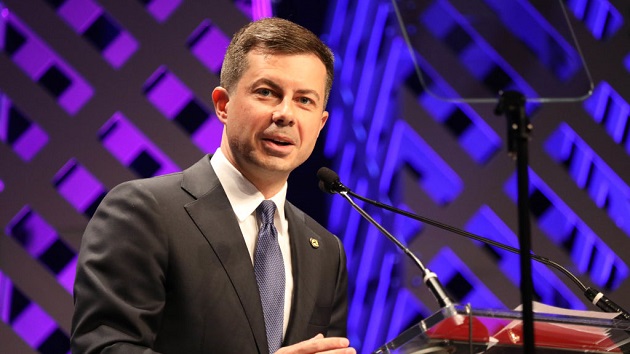 (WASHINGTON) — Transportation Secretary Pete Buttigieg had sharp words for the Republicans opposing a bill codifying the right to same-sex marriages, urging them to support the legislation’s passage in the Senate after it won bipartisan House approval.

Buttigieg, the first openly gay person to be confirmed to a Cabinet position, underscored during a CNN appearance on Sunday what it would mean for the legislation to become law, recounting a typical weekend morning in which he said he tries to take on household duties to give his husband, Chasten, a break.

“That half hour of my morning had me thinking about how much I depend on and count on my spouse every day. And our marriage deserves to be treated equally. I don’t know why this would be hard for a senator or a congressman,” Buttigieg said.

“I don’t understand how such a majority of House Republicans voted ‘no’ on our marriage as recently as Tuesday hours after I was in a room with a lot of them talking about transportation policy, having what I thought were perfectly normal conversations with many of them on that subject only for them to go around the corner and say my marriage doesn’t deserve to continue,” he said.

“If they don’t want to spend a lot of time on this, they can vote ‘yes’ and move on,” he continued, “and that would be really reassuring for a lot of families around America, including mine.”

Buttigieg also criticized Sen. Marco Rubio, R-Fla., specifically after Rubio said a vote on the bill would amount to a waste of time — echoing other Republicans who oppose the measure because they say Democrats are using it as political theater when no real threat to marriage rights exist.

“If he’s got time to fight against Disney, I don’t know why he wouldn’t have time to safeguard marriages like mine. Look, this is really, really important to a lot of people. It’s certainly important to me,” Buttigieg said, referencing Rubio’s dispute with Disney over the company’s criticism of a state law restricting discussions of sexual orientation and gender identity in public schools.

Rubio’s office did not immediately respond to a request for comment from ABC News.

Appearing on PBS last week, Buttigieg said the LGBTQ community was in “a very precarious moment.”

“Historically, rights and freedoms have always expanded, we went from one era to the next. It’s always been more free, and more just — even if imperfectly so. That was before. And the question now is, Are we going to start going backwards right now?” he said. “It is extremely disturbing, certainly as a married gay man and a member of the LGBTQ community, not only to see our rights coming up for debate once again but to see settled law called into question.”

Buttigieg’s remarks come as Democrats push multiple bills codifying unenumerated rights in the Constitution that had been extended via Supreme Court rulings.

With Roe v. Wade overturned last month, reversing five decades of national abortion access, Democrats argue other rights granted by the high court could be at risk, such as same-sex marriage.

Justice Clarence Thomas, one of the Supreme Court’s most conservative members, wrote in his concurring opinion rejecting Roe that the court should also reconsider its decisions legalizing same-sex marriage and ensuring contraception access.

Last week, 47 Republicans in the House joined with the Democratic majority in approving the bill ensuring recognition of lawfully granted same-sex and interracial marriages. One-hundred and fifty-seven Republicans voted against it, with some citing their personal beliefs and others saying it was unnecessary.

The bill faces an uncertain future in the Senate, where Democrats would need the support of 10 Republicans for passage.