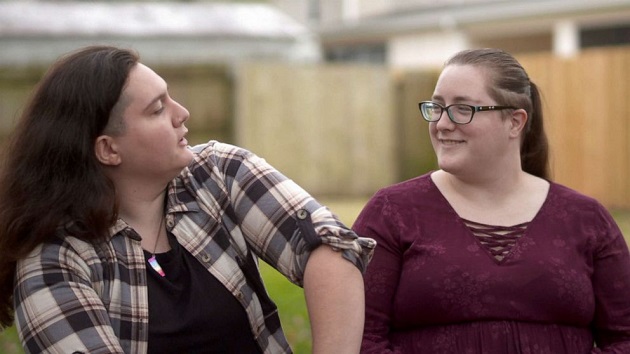 (NEW YORK) — Jay Guercio and Krystle Purificato are like a picture-perfect married couple who share a life and a child together – but their relationship is non-traditional.

Known as platonic partners, the couple’s relationship is not centered around sexual attraction or physical intimacy, but sharing a lifelong partnership.

“My best friend and I of 8 years got married, had a commitment ceremony, whatever you want to call it, but we did it because we wanted to raise kids together,” said Guercio, who is now raising a foster son, Eddie, with Purificato.

Last fall, Guercio and Purificato got married – becoming each other’s platonic spouse. The two had to navigate what it meant to take their relationship from friends to wives.

“There’s not one way to be married. You know, we have good communication. We have similar values. We have a type of partnership that works for both of us that’s going to stand the test of time,” said Purificato.

Dr. Logan Levkoff is an expert on sexuality and relationships. She said platonic partnerships can be for anyone, regardless of how they identify.

Guercio said they mostly identify as “demisexual,” which is a sexual orientation in which a person feels sexually attracted to someone only after they’ve developed an emotional bond with them, according to the Cleveland Clinic.

Purificato identifies as “graysexual.” “I use any and all pronouns. I’m gender fluid, identify as graysexual, which means that my attraction comes and goes. It’s not consistent like most people’s,” said Purificato.

Despite their deeply loving and trusting bond, Guercio and Purificato have faced criticism on social media – saying that people often try to invalidate their relationship by calling it a lie.

“Some people have said, ‘Your kids are gonna be confused.,'” said Guercio. And I’m, like, ‘How?’ Our kid is 17 years old. He sees nothing but love and two people who wanna take care of him and do everything in their power to be able to.”

April Lee and Renee Wong are another platonic couple based in Los Angeles – who often face the same questions surrounding their more than decade-long relationship.

“We were just classmates, then we just ended up spending a lot of time with each other, but it became like a deep connection, and we soon started calling each other kind of like soul mates, twin flames,” said Lee.

The two became separated when they went off to college: Lee was in Los Angeles and Wong in Singapore. But they continued to be drawn to each other half a world away.

“We would FaceTime when it was my morning and her night, and vice versa, and we just wanted to just spend all our time together,” said Lee.

After five years of long distance, Wong flew from Singapore to Los Angeles to be with Lee. The two share an apartment, a set of values and a plan for their lives together.

Both Wong and Lee identify as demisexual and attribute the sexual orientation as a reason why a platonic partnership works for them on a daily basis. For example, Lee has started dating someone and said her platonic partnership eases the pressure of her romantic relationship.

“I’m dating someone right now and I’m crazy about him. However, I don’t plan on making him my life partner even in the future,” said Lee. “And I think that that’s to the benefit of my romantic relationship because now all pressure is off.”

Dr. Logan Levkoff said that all interpersonal connections are complicated and often not one size fits all.

“This idea that there is one person out there, one magical person who is going to meet every one of your needs seems significantly counterintuitive to finding love,” said Dr. Levkoff. “Some are familial, some are platonic, some are sexual and they all count and they all matter.”

Like Guercio and Purificato, Wong and Lee hope for a future where their partnership won’t be in question.

“It’s been an amazing journey so far… It doesn’t matter what we are. The question is, ‘Are we happy?’ Yeah. So it’s valid,” Wong said.