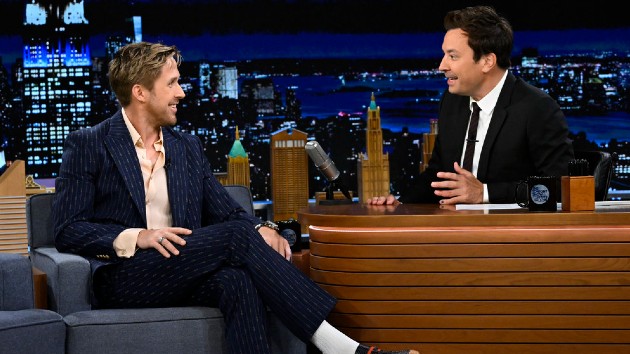 Who could forget the photo Warner Bros. released last month of Ryan Gosling dressed as Ken on the set of Greta Gerwig’s Barbie?

In the picture, the actor rocks a denim vest and a bleached blonde hairstyle as he stands in front of what looks to be Barbie’s pink Dream House.

Gosling appeared on The Tonight Show Starring Jimmy Fallon Thursday night, where he addressed the online conversation the photo caused about his character.

“I was surprised how some people were clutching their pearls at my Ken as though they had ever thought about Ken for a second before this,” Gosling said. “They never played with Ken. Nobody plays with Ken, man.”

He added that Gerwig and Noah Baumbach’s Barbie screenplay was the “best script” he has ever read.

Immediately after reading the script for the first time, Gosling said he walked out to his backyard and found what he took to be a sign – a Ken doll.

“You know where I found Ken, Jimmy?” Gosling asked. “Face down in the mud next to a squished lemon.”

He took a photo of the dirty Ken doll, which he promptly sent to Gerwig alongside the message, “I shall be your Ken, for his story must be told.”

Barbie also stars Margot Robbie as the titular doll. It will premiere in theaters on July 21, 2023.