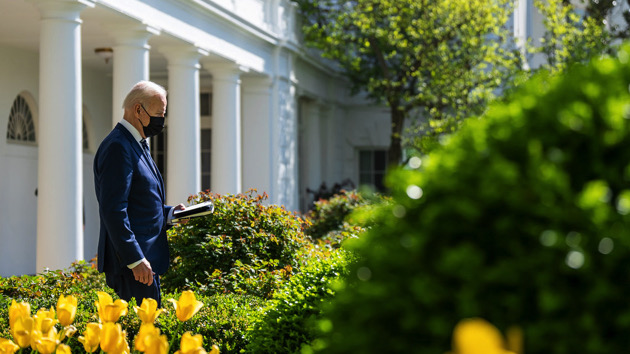 (WASHINGTON) — President Joe Biden’s “symptoms have improved” one day after testing positive for COVID-19, the physician to the president, Dr. Kevin O’Connor, said in a statement Friday.

Biden had a temperature of 99.4 degrees Thursday evening, his doctor said. The president took acetaminophen and his temperature has been normal since then, O’Connor said.

First lady Jill Biden, who is in Wilmington, Delaware, tested negative for COVID-19 Friday morning and remains symptom-free, according to her press secretary, Michael La Rosa. Jill Biden plans to remain in Wilmington until at least Tuesday, her office said.

The president felt “totally normal” during the day Wednesday, Jha said, and symptoms then started Wednesday evening, according to O’Connor.

President Biden continued working from the White House this morning, including speaking by phone with his national security team. pic.twitter.com/jdQkoDtupR

O’Connor said in a statement Friday that because Biden is vaccinated and double boosted he was not concerned for the president’s health.

“I anticipated that he will respond favorably, as most maximally protected patients do,” O’Connor said. “There has been nothing in the course of his illness thus far which gives me cause to alter that initial expectation.”

An update from me: pic.twitter.com/L2oCR0uUTu

The president will work in isolation until he tests negative, Jean-Pierre said.

Biden was last tested for COVID-19 on Tuesday, when he tested negative, according to Jean-Pierre.