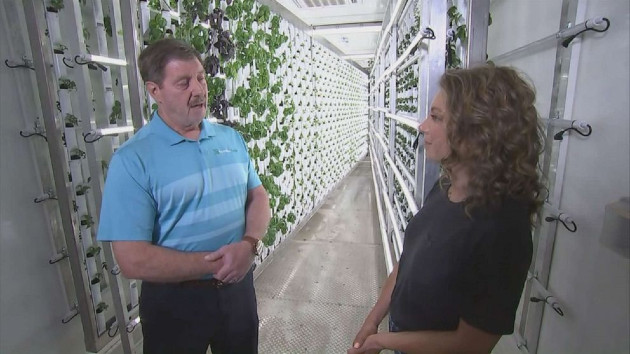 (NEW YORK) — Even near some of the busiest cities in the United States, nearly 54 million people have a tough time accessing fresh and healthy food, according to the United States Department of Agriculture.

One company based in a Denver suburb said they have a solution.

Farmbox Foods in Sedalia, Colorado, turns upcycled shipping containers into vertical hydroponic farms. The company claims the containers can create as much as two football fields worth of traditional agriculture. They grow more than 400-lbs of mushrooms a week.

“This is a 40 foot high cubed, insulated container that has been repurposed and then engineered to [with] three grow walls,” Walker told ABC News’ Ginger Zee. “[We can grow] right around two and a half acres to three acres of farmland in this container.”

The United States Department of Agriculture defines “food deserts” as areas where people have limited access to a variety of healthy and affordable food. There are approximately 6,500 food deserts in the United States based on 2002 and 2006 census data on locations of supermarkets, supercents and large grocery stores.

Often areas with a higher percentage of poverty and minority population are more likely to be food deserts, the USDA found in a 2012 study.

Walker said his moveable, temperature-controlled, farmland can be shipped and used anywhere.

“So we can be sitting or standing in this container here today and have a truck show up tomorrow and we can put it on a flatbed truck and ship it to Chicago in 48 hours later. Plug it in and it’s growing,” said Walker.

Walker said that his system of farming only uses the freshwater equivalent of about two loads of laundry a day.

“I think the biggest thing that we have going for us is we use 3 to 5 gallons of water a day. That’s it,” said Walker. “We find that our plants are growing 3 to 4 times faster than they would in an ordinary environment. So we like to say we’re farming without harming.”

Michael Boardman is a natural grocer in Lakewood, Colorado. His grocery store uses a Farmbox Foods container and he said it gives them control over their produce supply chain.

“We’ll be harvesting, taking it directly into our store [and it’s ready] for our customers,” said Boardman, who added that the produce is fresher than traditional grocery supply chains. “[The produce is] much more nutrient dense because it hasn’t been sitting on a shelf in a warehouse. It hasn’t been shipped across the country.”

Local grocers are not the only ones who have bought into Farmbox Foods. One of the company’s biggest clients is Centura Health, a local hospital system in Colorado Springs, Colorado.

“As we grow and develop in the foods [we grow], then we’re also giving this food to the communities through local food banks, farmer’s markets, so that people can get access and the food will be available for them,” said Gaughan.

Vertical farming, like Farmbox Foods, is often criticized due to the limited amount of foods that can be produced. But Farmbox Foods told ABC News that they are expanding quickly and have been testing carrots, potatoes and radishes.

Gaughan said the ready access to fresh food will only make a stronger and healthier community — all year round.

“We can tie food insecurity and poor nutrition to things like diabetes, heart disease, high cholesterol, high blood pressure, obesity, even mental health,” he said. “We can introduce people to a whole different way of getting their food, tasting their food, using their food in a culturally respective way, but also in a way that’s affordable and available year round.”