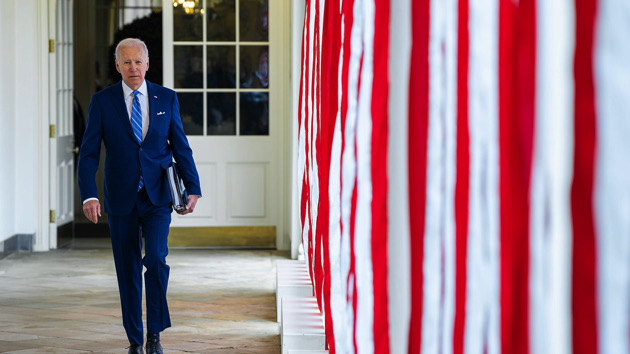 (WASHINGTON) — President Joe Biden will unveil on Thursday an expanded budget request to Congress with $37 billion in funding for law enforcement and crime prevention for what the White House is calling his “Safer America Plan.”

But Biden’s request is aspirational — it’s for fiscal year 2023, which for the U.S. government begins this October, and it needs to be approved by Congress. Presidential administrations past and present often make large, ambitious budget requests as a messaging tool, only to see them not come to fruition or to be whittled down.

As part of his “Safer America Plan,” the White House said Biden will request “a fully paid-for new investment of approximately $35 billion to support law enforcement and crime prevention — in addition to the President’s $2 billion discretionary request for these same programs.”

According to the White House, the requested funding would be used in hiring and training 100,000 new police officers for “accountable community policing,” clearing court backlogs, solving murders and setting up community task forces to share intelligence. The funds would also target crimes not directly related to guns, such as fentanyl trafficking.

Moreover, the White House said the plan would establish a $15 billion grant program for states and cities to use over the next 10 years that would prevent violent crime and help in “identifying non-violent situations that may merit a public health response or other response.”

“The President will also continue to call on Congress to take additional actions on guns,” the White House added, “including requiring background checks for all gun sales, banning assault weapons and high-capacity magazines, closing the dating violence restraining order loophole, and banning the manufacture, sale, or possession of unserialized ‘ghost guns.'”

On Thursday afternoon, Biden will travel to Wilkes-Barre, Pennsylvania, where he will deliver remarks on gun violence, firearms legislation and policing at Wilkes University, according to the White House.

The president’s budget request comes in the wake of a string of mass shootings that have taken place across the United States this summer, including one at a Fourth of July parade in Highland Park, Illinois, another at a supermarket in Buffalo, New York, and at an elementary school in Uvalde, Texas.