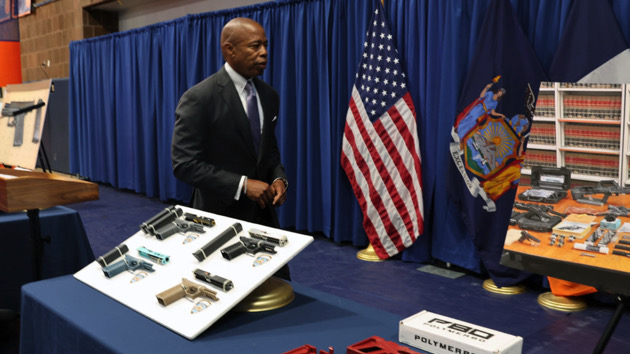 (NEW YORK) — More than half of the guns seized on the streets of a dozen American cities after being used in crimes were made by five manufacturers, according to data released Wednesday by the mayors of those cities.

The group is gathered in New York for a summit on preventing gun violence.
The top manufacturer of recovered guns is Glock in nine of the 12 cities. On average, more than one and a half times more Glocks were recovered than the second-leading manufacturer in each of those nine cities.

“We’re dealing with the same problem: a $9 billion industry turning their profits into our pain,” New York Mayor Eric Adams told ABC News in an appearance on Good Morning America with the mayors of Buffalo, New York; Little Rock, Arkansas; and St. Louis.

“Over 110 people are killed by guns every day in our country,” Buffalo Mayor Byron Brown said. “Something has to be done.”

The mayors have convened to discuss strategies to combat gun violence and “to get that gun before it hits our streets,” Adams said.

“If this were any other industry that was as deadly then the government would have already acted to make sure that we got rid of whatever was killing our citizens,” Jones said. “We haven’t seen that action from the federal government so we have to look at the root causes and try to cure gun violence in our cities.”

“Any of us at any point in time will receive a phone call about a homicide and 99.9% of the time it relates to a gun,” Scott said. “We have to address the guns.”