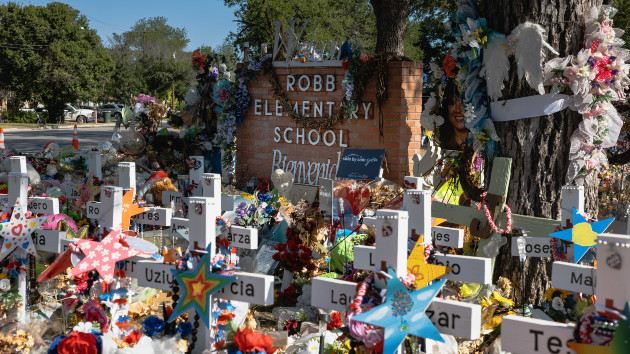 (UVALDE, Texas) — Emotions reached a roiling boiling point Monday during an open forum hosted by the school board in Uvalde, Texas, just one day after a 77-page report by a joint committee of the Texas Legislature slammed the police response to the incident and the school district’s lack of preparation for such an attack.

A special public forum held by the Uvalde Consolidated Independent School District Board to allow community members to ask questions and voice concerns about the changes and updates for the 2022-2023 school year — including safety and security plans — quickly became a tinder box of emotion and anger.

Community members resoundingly said they want former Uvalde CISD Police Chief Pete Arredondo — currently on paid administrative leave — fired immediately. As the May 24 massacre unfolded, Arredondo allegedly failed to take on the role of incident commander or transfer the responsibility to another officer on scene, despite it being an “essential duty” he had assigned himself in the active shooter plan he helped write, the committee said.

Many called for members of Uvalde’s school district police force who were present during the shooting to be fired, for an independent investigation into the Robb Elementary School failures, and for answers and transparency about their specific concerns following the report.

The community also wanted answers on what was known about the Robb Elementary School door being locked or not.

“In violation of school policy, no one had locked any of the three exterior doors to the west building of Robb Elementary. As a result, the attacker had unimpeded access to enter,” the committee reported.

The committee also faulted the school district for failing to treat the maintenance of doors with known faulty locks with “appropriate urgency.”

Speakers at the forum also called for an independent investigation into the massacre. The group was united, calling several times to stand up together — to be courageous and voice their truth.

After apologizing in his introduction for not having held a forum like this sooner, Harrell, sitting on stage alongside the full school board, opened the floor to questions.

“First of all, I just want to say last time y’all had us on a time limit of sorts, and that’s not going to fly today,” said Brett Cross, the uncle of Uziyah Garcia. “There’s no other way to put it. We have a lot to say, and we won’t be silenced and we won’t be stopped. So if y’all had the idea of a time limit, it’s not going to get followed this time.”

Cross was referencing a press conference held by the special committee report Sunday on the failed police response to the shooting that saw 19 children and two teachers killed. Families were invited to attend and ask questions Sunday, and those invited — including the media and families — had to fill out compulsory paperwork required by the committee to ask a question. Many members of the community did, but due to time constraints, they were not given the opportunity to ask their questions.

Before the forum began Monday, attendees from the community sporting “Uvalde Strong” matching shirts placed photos of the victims on the seats in the front row facing the school board members.

When later asked by Cross if Arredondo was going to be fired, Harrell said, “That will be a decision… We will take the report into consideration, it will be a closed session.”

“I’ll tell you this: If he’s not fired by noon tomorrow, then I want your resignation and every single one of you board members,” Cross responded.

“What we need to do now is put families in your sessions so we know what’s going on, what’s going on. And the way you’re spending your money for the security of our children,” Salazar continued. “We pay over 40% of the city budget for the school and for the police, and you hired trash. That’s not right.”

“I lost a loved one right here. My only granddaughter, I can hold myself together now because I’ve done my crime. Now it’s time to do my fighting. And you have seen me in the papers and you will see me in the papers a lot more. Because this isn’t the end. This is just the beginning of a war that you guys created for our children,” he added, to cheers from community members in the crowd.