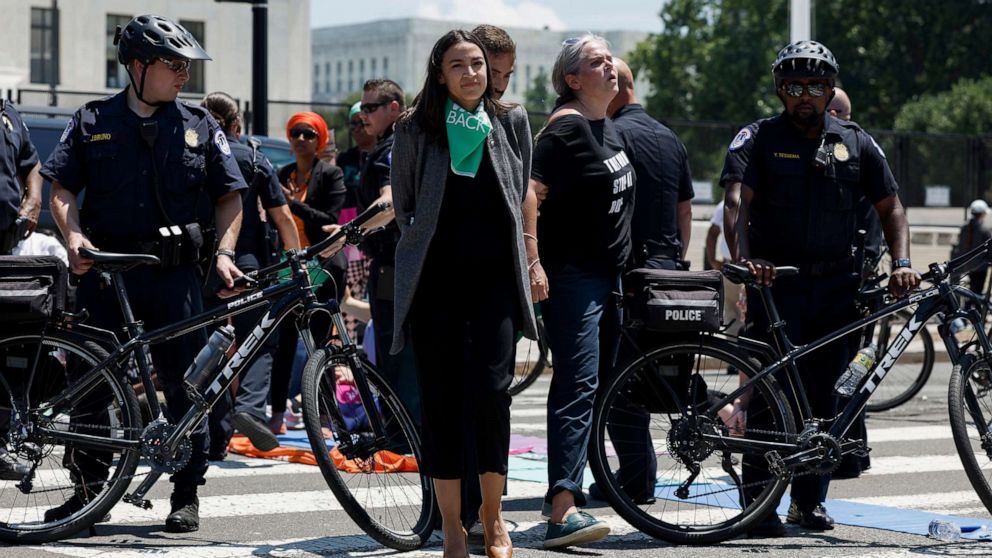 (WASHINGTON) — Several House Democrats were arrested on Tuesday while protesting outside the Supreme Court over its decision to overturn constitutional protections for abortion access.

The group of Democratic lawmakers and others marched over to the high court from the Capitol while chanting “we won’t go back” and “our body our choice” — the latest demonstration after five conservative justices ruled last month to reverse the 1973 Roe v. Wade decision that first legalized abortions nationwide.

Seventeen lawmakers in total were arrested, according to Capitol Police, including Reps. Katherine Clark of Massachusetts, Alexandria Ocasio-Cortez of New York, Ilhan Omar of Minnesota, and Illinois’ Jan Schakowsky.

Police at the Supreme Court told the protesters that they were participating in “illegal demonstration activity” before advising anyone who didn’t want to get arrested to leave, which sparked singing and chanting from the group.

Officers then began arresting the demonstrators, though no handcuffs were seen. Police also collected IDs and took pictures of those arrested — including of some of the lawmakers — and brought water to the staging area for protesters to drink.

Tuesday’s event was part of Democrats’ efforts to continue highlighting the Supreme Court’s blockbuster decision, which allowed the implementation of stringent abortion restrictions or outright bans in at least a dozen states across the country.

In statements, the lawmakers vowed they would keep fighting to protect abortion access.

“The extremist Republican Party is determined to take us back in time and take away our rights. I refuse to stand on the sidelines as their rampage continues,” Clark said in a statement. “I am furious and heartbroken, and I will proudly fight for our right to abortion and all of our Constitutional rights. They can arrest me, but we won’t allow them to arrest freedom.”

The court’s ruling, widely celebrated by conservatives, was met with widespread protests by abortion rights supporters.

Democrats in liberal states have pushed efforts to enshrine abortion protections into law. But at the federal level, lawmakers have struggled to pass similar legislation, given GOP opposition and reluctance to change Senate rules.

House Democrats this week passed two bills, one to codify Roe v. Wade and another to protect a person’s right to travel to other states for legal abortions. However, those measures are not expected to have sufficient support to pass the 50-50 Senate.