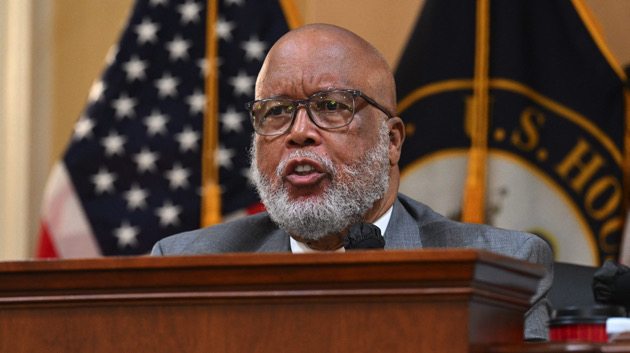 (WASHINGTON) — Rep. Bennie Thompson, the chairman of the House select committee investigating the Jan. 6, 2021 attack on the U.S. Capitol, announced Tuesday he has COVID-19 two days ahead of a prime-time hearing Thursday.

“I tested positive for COVID-19 yesterday, and I am experiencing mild symptoms,” Thompson said in a statement. “Gratefully, I am fully vaccinated and boosted. I am continuing to follow CDC guidelines and will be isolating for the next several days.”

Despite Thompson’s diagnosis, the committee’s next hearing later this week will go on as planned.

“While Chairman Thompson is disappointed with his COVID diagnosis, he has instructed the Select Committee to proceed with Thursday evening’s hearing,” a spokesperson for the committee said in a statement. “Committee members and staff wish the Chairman a speedy recovery.”

Thursday’s hearing will focus on former President Donald Trump’s response to the attack, zeroing in on the 187 minutes between his speech at the Ellipse and his statement later that day telling rioters to go home.

Luria will be leading the hearing along with Republican Rep. Adam Kinzinger.

“Mr. Kinzinger and I plan to go through that 187 minutes. What happened between the time that [Trump] left the stage, gave these inflammatory remarks and gave people the impression … that he was going to himself march with this crowd to the Capitol,” Luria said.

“[And] what happened between that moment and then around 4:17 in the afternoon, which is about 187 minutes later, when he finally made a statement to the nation, to the people at the Capitol to go home,” she added.

Cassidy Hutchinson, a top aide to former chief of staff Mark Meadows, previously testified that Trump was not empathetic to the violent language targeting his vice president during the riot — including calls to “hang Mike Pence.”

Two more aides in Trump’s White House are expected to testify before the panel, sources familiar with the matter confirmed to ABC News.

Former deputy White House press secretary Sarah Matthews and Matthew Pottinger, a member of the National Security Council during the Trump administration, are slated to speak Thursday. Both officials resigned from their posts on Jan. 6, 2021.

Thompson, a Mississippi Democrat, has opened each of the seven public hearings the committee has held since early June.

In his statement Tuesday, Thompson encouraged Americans to get vaccinated.

“The pandemic has impacted our lives, changed the way we work, and affected our daily activities,” he said. “Vaccinations are crucial to humanity. The message to unvaccinated Americans is to protect yourself from infectious diseases by getting vaccinated. We must continue to do our part.”