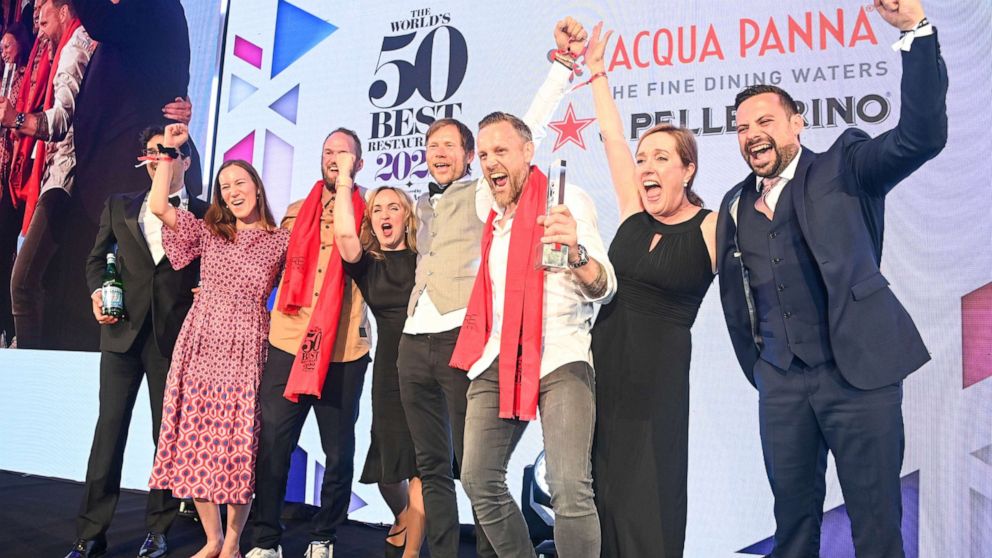 The list is produced annually by the U.K.’s William Reed Business Media and based on a poll of international chefs, restaurateurs and critics.

“Geranium invites guests to taste nature while simultaneously observing it around them. The locally-inspired, seasonally-changing ‘Universe’ tasting menu takes place over a minimum of three hours with around 20 courses split evenly between appetizers, savory dishes and sweets,” World’s 50 Best wrote in its description of the winning restaurant.

Geranium’s leading chef and sommelier duo, Rasmus Kofoed and Søren Ledet, who operate out of the iconic eighth floor restaurant in the center of Copenhagen, overlooking Fælledparken, reached the zenith of their careers Monday night as they received the top award.

The two were hailed for their “constant reinvention and innovation.”

Moments after the win — which dethroned René Redzepi’s Copenhagen-based Noma — Kofoed, who leads kitchen operations, told World’s 50 Best, “It’s all that we could dream of.”

“The last year, especially after the lockdown when we reopened Geranium, we changed the menu completely and it was very difficult to change everything. Said goodbye to the signature dishes … but I felt a lot of freedom,” Kofoed said.

“It has been a great journey together with the team so we could all have a great experience,” he added, speaking directly to his “loyal and dedicated” team back in Copenhagen.

“When you’ve been here as many years as we have, every year is so amazing to just meet everybody from the whole industry and friends we’ve gained, but to finally be standing where we are tonight is such a mind blowing experience,” he said.

Geranium has an already impressive history. In 2016, it became the first Danish restaurant to win three Michelin stars.

It also won the World’s 50 Best Restaurants’ Art of Hospitality Award in 2018, which was given this year to New York City’s husband and wife team Junghyun ‘JP’ and Ellia Park of the 14-seater hotspot, Atomix, located in Manhattan near Koreatown.

The ground-breaking Korean restaurant took home the number 33 spot on this year’s overall list and was one of only three U.S. restaurants selected, along with Le Bernardin in New York and SingleThread in Healdsburg, California.

In 2022, Kofoed made Geranium a “meat-free zone” to focus solely on local seafood and organic vegetables from biodynamic farms in Denmark and Scandinavia. The artful creations on the “Spring Universe” menu are served on nature-inspired crockery and include items like lightly smoked lumpfish roe with milk, kale and apple, as well as forest mushrooms with beer, smoked egg yolk, pickled hops and rye bread.

The wine list focuses on low-manipulation labels to complement Kofoed’s food, and the drink menu offers unique and refreshing juice pairings with creations like rhubarb with geranium and carrot.

The 20th edition of the annual World’s 50 Best Restaurants list was curated with the help of a 1,080-person panel of culinary experts, who provided an audited vote on top tier destinations for unique culinary experiences.

The annual rundown is considered by some a barometer for global gastronomic trends.

No. 1 Geranium, Copenhagen
No. 2 Central, Lima
No. 3 Disfrutar, Barcelona
No. 4 DiverXO, Madrid
No. 5 Pujol, Mexico City

Check out the full list of winners here, including best sommelier Josep Roca, best female chef Leonor Espinosa of Leo in Bogotá, best pastry chef René Frank of Coda in Berlin and more from across the globe.