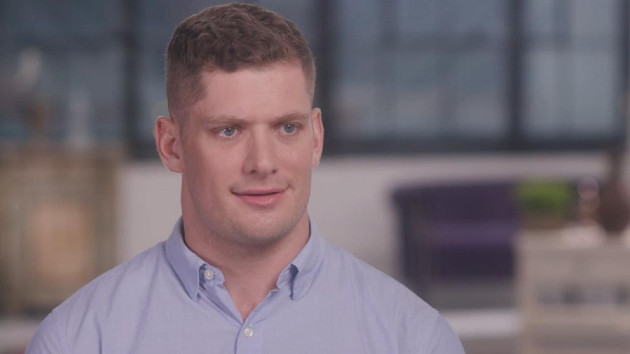 But ultimately, he realized that one Instagram post could be a way to create a positive narrative for others and help society’s conversation around sexual orientation, and so he became the first active NFL player to come out as gay.

Nassib, 29, spoke to ABC News’ Good Morning America co-anchor and former NFL star Michael Strahan about that life-changing moment on social media and where he is now.

“I stared at the phone for, like, an hour just looking at it, trying to hype myself up,” he recalled. “The last thing I said was like, ‘You know what — for the kids.’ And: pressed post.”

Nassib said it “definitely was some difficult times” over the 15 years while he considered sharing that part of his life publicly.

“Really struggling with who you are and trying to figure out that side of your life was definitely a tough part,” he said.

The former Oakland Raiders lineman, who was released earlier this spring, said, “I just wanted to show that it really doesn’t matter — your sexual orientation.”

“I came out to my close friends and family years ago. And I wanted to do it publicly because I wanted to stay ahead of the narrative,” he said. “I just wanted to own the story and make sure I did it on my terms. One of my biggest fears was that I would only be remembered for being gay.”

When it came to being in a locker room full of men in a sport considered to be more conservatively masculine, Nassib said, “I really wasn’t scared about that at all.”

“I had a great relationship with my teammates,” the Raiders former edge rusher said. “I just was met with the most incredible support from my teammates.”

Nassib’s announcement was met with a tidal wave of support on social media from celebrities, fellow players and fans.

“[I] actually hope that one day videos like this and the whole coming out process are just not necessary,” he said. “When people come out, they’re coming out of the closet because they’re afraid. They have fear that they’re gonna have negative impact on their life, on their relationships, on their job.”

He added, “I just hoped that one day we don’t have those fears — that’s the society I hope for one day. And I hope I can be a positive push in that direction.”

Statistics show that support for the LGBTQ+ community can be life-saving, according to a recent survey from The Trevor Project’s 2022 National Survey on LGBTQ Youth Mental Health that found 45% of LGBTQ youth had contemplated suicide in the last year, but those who had support from family attempted suicide at less than half the rate.

Nassib said he has a message for kids at home who see legislation like Florida’s so-called “don’t say gay” bill.

“They have support from a massive community of people who will love them no matter what, and we are making strides in a positive direction,” he said. “It won’t be a perfect road, and we just have to continue the course and make sure that we do it from a place of love and not from a place of animosity.”

Nassib donated $100,000 to the Trevor Project, which was matched by the NFL, to support the nonprofit that focuses on suicide prevention and support in the LGBTQ community.

The Trevor Project received many anonymous messages from the LGBTQ+ community thanking Nassib for his courage and honesty.

“You may very well have saved some lives today,” one message read. Another one stated, “Way to be a leader on and off the field, Carl. You are saving lives through your bravery.”

And finally another said, “Seeing your message today made me so excited to be part of a world I could see people like me in any sort of public role.”

“Love it. That’s incredible,” Nassib said after hearing the replies. “I hope that I can continue to be that person.”

For the last four years, Nassib said he has “been working on an app called Rayze” that “introduces volunteers and donors to causes and nonprofits that they’re passionate about” and allows people to easily donate to those causes.

As football season nears, Nassib, who said he was not surprised to be released by the Raiders, is preparing for camp as a free agent.

“It was a great time we had. I have so much love for Las Vegas. It allowed me to do a lotta great things,” he said. “And I think that there’ll be more — there’ll be better opportunities in the future.”

Without naming teams or organizations where he hopes to end up this fall, Nassib said, “the best scenario for me is, like, the best opportunity to show what I got. Got a lot in the tank.”