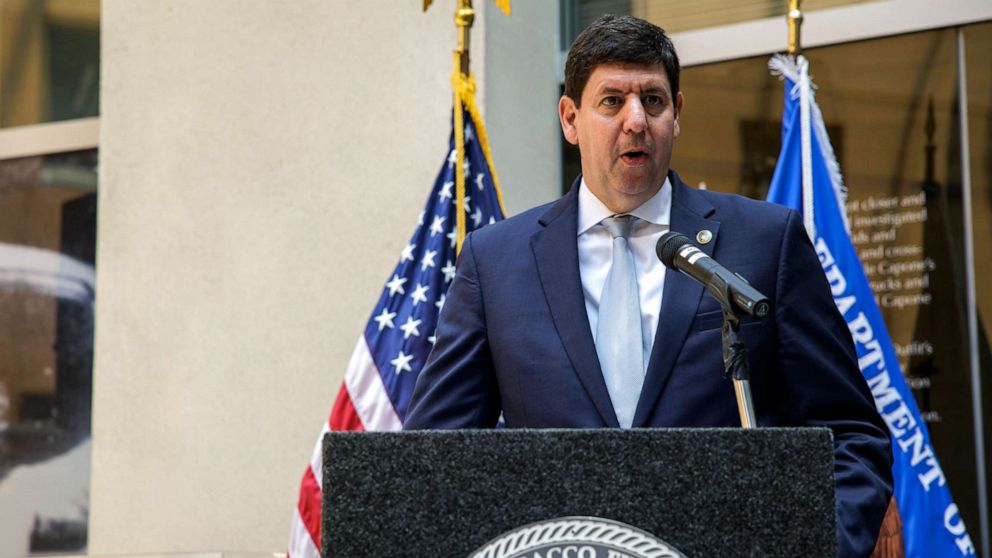 (WASHINGTON) — For the first time in seven years, the country’s lead agency on protecting the public from crimes involving firearms, explosives and arson has a Senate-confirmed director.

Steve Dettelbach was sworn in on Tuesday by Attorney General Merrick Garland in front of his family and friends at the Bureau of Alcohol, Firearms, Tobacco and Explosives in Washington.

Dettelbach, a career prosecutor who previously served as the U.S. attorney for the Northern District of Ohio, said it was “the honor of his professional life.” He is the first congressionally approved chief of the agency since 2015. President Joe Biden’s previous nominee was withdrawn in part because of outside opposition to his gun control politics.

Dettelbach — who also faced criticism from gun groups — was subsequently confirmed earlier this month in a 48-46 vote and drew praise from other law enforcement.

“You have not just my promise and my vow to fight with you, but you have my heart, my soul, you have everything that I can give to try to join you in this effort,” he told the assembled crowd on Tuesday.

He added that some of the major challenges facing the country today — including rates of gun violence, mass shootings and extremism — are also the issues the ATF can help with.

He pointed to the Highland Park, Illinois, parade massacre on the Fourth of July, when ATF helped trace the gun involved; and, he said, the agency assisted in finding evidence in the rubble of the 1993 World Trade Center bombing.

“It’s going to take all of us in this nation, in law enforcement,” to address the country’s ongoing threats of rising violence and mass shootings, Dettelbach said.

“The rule of law is the one thing that drives me — there is one set of laws that governs everyone in the nation, and nobody is above it,” he said.

The attorney general lauded Dettelbach and thanked him for returning to the Justice Department.

“He understands that ATF’s mission has never been more urgent than it is today,” Garland said. “Time and again this year, we have been tragically reminded of the essential role that ATF plays in the fight to protect our communities from gun violence.”