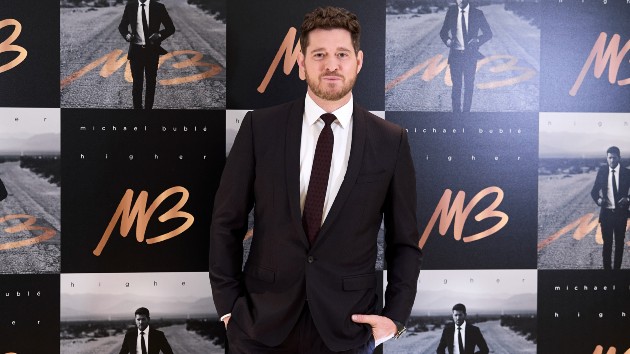 Michael Bublé‘s latest hit is “I’ll Never Not Love You,” from his new album, Higher. Michael co-wrote the song with Michael Pollack, who he tracked down after he realized that Pollack had co-written a song that both he and his kids loved: Justin Bieber‘s song, “Holy.”

Turns out Pollack was a fan of Michael’s, too, and was eager to work with him.  But as Michael tells ABC Audio, it took them a while for them to get the song just right.

“That song was interesting ’cause it started as a ballad. You know, it was very slow,” Michael says. “And I remember, I called [Pollack] on a Friday morning and I said, ‘This is a great song, Mike, really catchy. The lyrics are beautiful…but something’s wrong…it’s not hitting for me.'”

Michael asked Pollack to make the song “double time” — in other words, faster.  According to Michael, Pollack was annoyed by the request, but told him, “Yeah, yeah, I’ll put something together.” Michael says later that night, Pollack sent him the new version, and he was blown away.

“It was 11 o’clock at night, I was in my boxer shorts in my kitchen. I was going to get water for my wife and I heard it for the first time and I knew I had a hit song,” Michael remembers.

“Instantly, I knew and I think I danced in my kitchen for like an hour and a half fantasizing about, you know, ‘What would the video be? How am I going to perform this? Oh my God, people are going to go crazy when they hear this!'” he laughs.

“There’s nothing better in the whole universe than writing something and going, ‘Oh my God, it’s done. I think we got a hit,'” Michael declares. “It was amazing.”