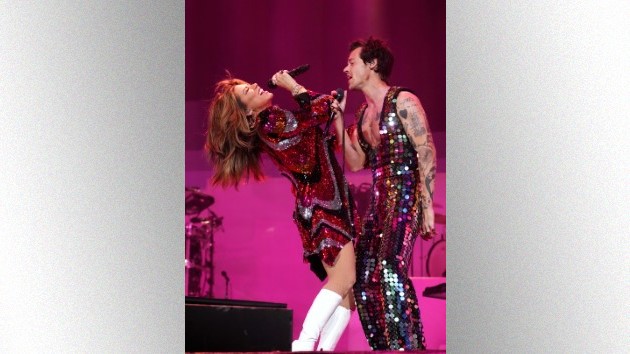 Over the weekend, the Coachella festival kept its reputation for surprises intact: Billboard reports that Harry Styles was among the many stars who brought out unannounced guests during their sets.

During Harry Styles‘ set on Friday, he brought out Canadian icon Shania Twain, of all people, to perform her ’90s classics “Man! I Feel Like a Woman” and “You’re Still the One.” According to Billboard, Harry told the crowd, “In the car with my mother as a child, this lady taught me to sing. She also taught me that men are trash.”

He then told Shania, “But to you, for the memories you gave me with my mother, I’m forever grateful.”

She replied, “I’m at a loss for words, I’m a bit starstruck. When I was writing this song, you were just a kid. It’s kind of a dream, and very surreal, to be sitting right here with you.”

Harry, of course, has displayed his reverence for older female stars in the past by striking up a friendship — and performing several times — with Stevie Nicks. Billboard notes that Harry also debuted two new songs at Coachella from his upcoming album Harry’s House: “Boyfriends” and “Late Night Talking.”

And speaking of bringing out Canadian superstars as surprise guests, Justin Bieber was a surprise guest during Daniel Caesar‘s Friday set, joining his fellow Canadian singer to perform their Grammy-nominated hit “Peaches.”