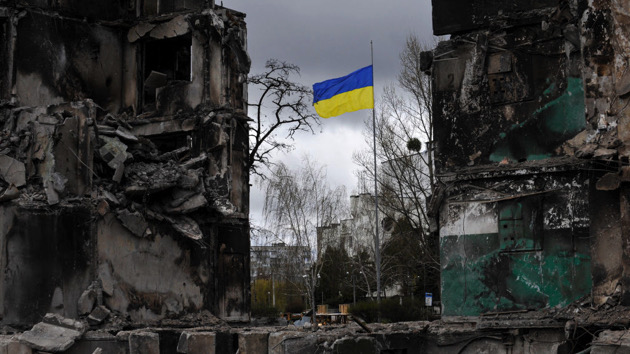 Here’s how the news is developing. All times Eastern.

Ukrainian President Volodymyr Zelenskyy said Russian forces have begun their offensive in the eastern part of the country after a week of building up troops.

“It can now be stated that Russian troops have begun the battle for Donbas, for which they have been preparing for a long time,” the president said in his nightly address. “A very large part of the entire Russian army is now focused on this offensive.”

Ukrainian and U.S. officials have said Russian troops exiting the Kyiv region over the last week were moving to eastern Ukraine as part of a new effort to take over land partially controlled by the self-proclaimed Republics of Donetsk and Luhansk. Those two breakaway regions were already aligned with Russia following a war that began in 2014.

Zelenskyy, however, warned that Russian forces would not be successful in taking all of the land in the southeastern region of Ukraine.

“No matter how many Russian soldiers are driven there, we will fight,” he said. “We will defend ourselves. We will do it daily. We will not give up anything Ukrainian, and we do not need what’s not ours.”

Pentagon spokesman John Kirby said Monday that while there has been combat in the Donbas region in eastern Ukraine for some weeks, it is part of Russia’s ongoing “shaping” operations for a future offensive, and not the offensive itself.

“We’re not disputing that there’s not combat going on in the Donbas,” Kirby said. “What we’re saying is that we still consider that what we’re seeing to be a piece of shaping operations.”

“That the Russians are continuing to set conditions for what they believe will be eventual success on the ground by using, by putting, in more forces, putting in more enablers, putting in more command and control capability for operations yet to come,” he said.

Asked to clarify his answer, Kirby replied: “We believe that the Russians are shaping and setting the conditions for future offensive operations. We also see … that there is active combat going on right now in the Donbas as there has been for the last several weeks.”

Kirby described the fighting in the besieged port city of Mariupol as part of that since the Russians are “trying to set the conditions for more aggressive, more overt and larger ground maneuvers in the Donbas.”

He added that the Russians have also continued to flow in artillery, helicopters, enabling troops and more command and control units as part of the groundwork for that upcoming operation.

Kirby said that the U.S. believes that Russia has reinforced the number of battalion tactical groups in eastern and southern Ukraine as part of their preparations for a large operation in the Donbas region.

The U.S. is still assessing what the Russians were attempting to strike in Lviv in western Ukraine on Monday, according to Pentagon spokesman John Kirby.

Kirby said he would not describe Monday’s airstrike as a “bombardment” and said he did not know Russia’s intent.

“We don’t have a clear sense of battle damage assessment about what they were targeting and what they hit. At this time, we don’t have any indication that Western aid was targeted and/or hit or destroyed,” Kirby said.

Apr 18, 3:23 pm
US offering temporary protected status to Ukrainians in US as of April 11

The U.S. will offer temporary protected status to Ukrainians already in the country as of April 11, according to a new notice from the Department of Homeland Security in the Federal Register.

The Biden administration announced last month that it would offer Ukrainians this legal basis to stay in the U.S. if they had arrived before March 1. This new notice means that Ukrainians who have been in the U.S. as of April 11 can apply for the legal status, which will remain in effect for 18 months — until Oct. 19, 2023.

U.S. Citizenship and Immigration Services estimates that about 59,000 Ukrainians could be eligible, according to the Federal Register notice.

Andriy Yermak, head of the Office of the President of Ukraine, has tweeted about the change, which he said was made at the Ukrainian government’s request.