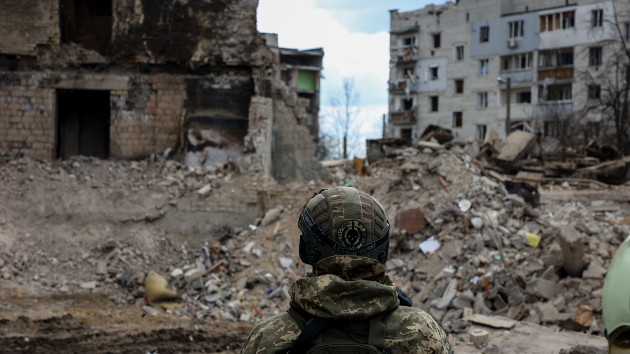 Apr 12, 8:07 am
Nine humanitarian corridors to open in eastern Ukraine on Tuesday

She said in a statement via social media Tuesday that evacuation routes were agreed upon for those traveling by private cars from besieged Mariupol in the Donetsk Oblast, as well as from Berdyansk, Tokmak and Enerhodar in the Zaporizhzhia Oblast — all of which lead to the southeastern city of Zaporizhzhia.

The same routes were opened Monday, allowing a total of 4,354 people to evacuate via buses and private cars, according to Vereshchuk. However, Vereshchuk said buses carrying people from Berdyansk, Tokmak and Enerhodar to Zaporizhzhia city were being held up by Russian forces at a checkpoint in Vasylivka for a third day in a row.

Ukraine announced Tuesday it is investigating claims that chemical weapons were used in an attack against Ukrainian soldiers in besieged Mariupol.

The Azov Regiment, a far-right group now part of the Ukrainian National Guard, alleged in a statement via Telegram on Monday that a Russian drone had dropped “a poisonous substance of unknown origin” on its fighters defending a giant metals plant in Mariupol, a southeastern port city in Ukraine’s Donetsk Oblast that has been subjected to heavy bombardment since the Russian invasion began on Feb. 24. The Azov, which did not provide evidence of the alleged attack, said its fighters had suffered minor injuries.

The claims could not be independently verified by ABC News.

Eduard Basurin, a spokesperson for Russia-backed separatist forces in Donetsk Oblast, denied the allegations, telling Russian news agency Interfax that separatist forces “haven’t used any chemical weapons in Mariupol.” However, on the eve of the alleged attack, Basurin appeared to urge their use, telling Russian state media that Russia-backed forces should seize the Mariupol metals plant from Ukrainian soldiers by blocking all the exits and using “chemical troops to smoke them out.”

When deployed as a weapon, phosphorus can inflict excruciating burns and lead to infection, shock and organ failure. Although phosphorus is not classified as a chemical weapon under the Chemical Weapons Convention, its use as an incendiary weapon in civilian areas is forbidden under the Geneva Conventions.

The United Kingdom is “working urgently” to investigate the reports, according to U.K. Foreign Secretary Liz Truss, who noted that any confirmed use of chemical weapons in Mariupol would be a “callous escalation” of the war.

U.K. Armed Forces Minister James Heappey told Sky News on Tuesday that “all options are on the table in terms of how the West might respond.”

Meanwhile, the United States said it was “aware” of the reports.

“We cannot confirm at this time and will continue to monitor the situation closely,” Pentagon press secretary John Kirby said in a statement Monday. “These reports, if true, are deeply concerning and reflective of concerns that we have had about Russia’s potential to use a variety of riot control agents, including tear gas mixed with chemical agents, in Ukraine.”