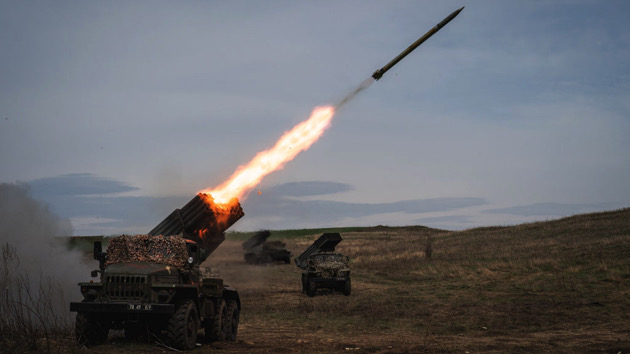 Apr 11, 10:03 am
Ukraine agrees to 9 humanitarian corridors from the east

She said in a statement via social media Monday that evacuation routes were agreed upon for those traveling by private cars from besieged Mariupol in the Donetsk Oblast, as well as from Berdyansk, Tokmak and Enerhodar in the Zaporizhzhia Oblast — all of which lead to the southeastern city of Zaporizhzhia. Buses from Zaporizhzhia city were also waiting to pass a checkpoint in Vasylivka, according to Vereshchuk.

Apr 11, 8:48 am
Russia may use phosphorus munitions in Mariupol, UK warns

The United Kingdom is warning of Russia’s possible use of phosphorus munitions in the besieged Ukrainian city of Mariupol.

Russian forces have already been accused of using phosphorus bombs in Ukraine since launching an invasion on Feb. 24. When deployed as a weapon, phosphorus can inflict excruciating burns and lead to infection, shock and organ failure.

After withdrawing troops from the north, the Russian military is said to be refocusing its offensive on the Donetsk and Luhansk oblasts in eastern Ukraine’s disputed Donbas region, where Russia-backed separatist forces have been battling Ukrainian soldiers since 2014. Mariupol, in the Donetsk Oblast, and its residents have been under heavy Russian bombardment for over a month, but Moscow has so far failed to win full control of the strategic port.

“Russian forces prior use of phosphorous munitions in the Donetsk Oblast raises the possibility of their future employment in Mariupol as fighting for the city intensifies,” the U.K. Ministry of Defense said Monday in an intelligence update.

Meanwhile, Russian shelling has persisted in the Donetsk and Luhansk oblasts, according to the ministry, “with Ukrainian forces repulsing several assaults resulting in the destruction of Russian tanks, vehicles, and artillery equipment.”

“Russia’s continued reliance on unguided bombs decreases their ability to discriminate when targeting and conducting strikes while greatly increasing the risk of further civilian casualties,” the ministry added.

Ukrainian forces are preparing to respond to a planned Russian attack on the eastern side of the country, Ukrainian President Volodymyr Zelenskyy announced in his address on Sunday.

Russian troops are expected to move to an even larger operation in the east of Ukraine, which will enable them to carry out even more bombardments, Zelenskyy said, adding that Ukrainian forces are ready for the attack.

Zelenskyy added that he and other government officials are doing everything they can to ensure that Ukraine gets the world’s attention, especially as Russia continues to attempt to influence the narrative and justify the invasion.

This coming week will be just as important as previous weeks, Zelenskyy said.

“It will be just as tense and even more responsible,” he added.

Nearly 23,000 Ukrainian refugees returned to Ukraine on Saturday after fleeing the country following the Russian invasion in February, according to Ukrainian and United Nations officials.

The repatriated Ukrainians are among the more than 4.5 million who left the country between Feb. 24 and April 9, according to the U.N. High Commissioner for Refugees.

More than half of the Ukrainian refugees fled to neighboring Poland, officials said.

The Polish border guard service is reporting that despite the war still raging in Ukraine, the number of refugees voluntarily returning to Ukraine reached the highest figure for a single day on Saturday since the war began, according to Ukraine’s Center for Strategic Communications and Information.

The UNHCR estimated that as of April 8, more than 7.1 million people in Ukraine have been displaced due to the war.

The death toll climbed to 57 on Sunday from an alleged Russian rocket attack Friday on a crowded train station in the eastern Ukrainian city of Kramatorsk, Ukrainian officials said.

Among those killed in the attack were five children, said Pavlo Kyrylenko, governor of the Donetsk Oblast in the Donbas region. Another 109 people were wounded when two Russian rockets struck the train station.

“There are many people in a serious condition, without arms or legs,” said Kramatorsk Mayor Oleksandr Goncharenko according to the Associated Press.

The number of dead victims in the attack grew from 50 on Friday, officials said.

Ukraine’s state-owned railway company issued a statement on Facebook calling the attack “a purposeful strike on the passenger infrastructure of the railway and the residents of the city of Kramatorsk.”

Graphic images provided by Ukrainian officials showed the aftermath of the attack — bodies lying on the ground next to scattered luggage and debris, with charred vehicles parked nearby.

The remnants of a large rocket with the Russian words painted on its side reading “for our children” was also seen on the ground next to the main building of the train station.

Russia has denied involvement in the attack. Kremlin spokesman Dmitry Peskov claimed involvement of Russian forces was already ruled out by the Russian Ministry of Defense, based on the type of missile that was used — a Tochka-U short-range ballistic missile.

“Our armed forces do not use missiles of this type,” Peskov told reporters during a press briefing Friday. “No combat tasks were set or planned for today in Kramatorsk.”