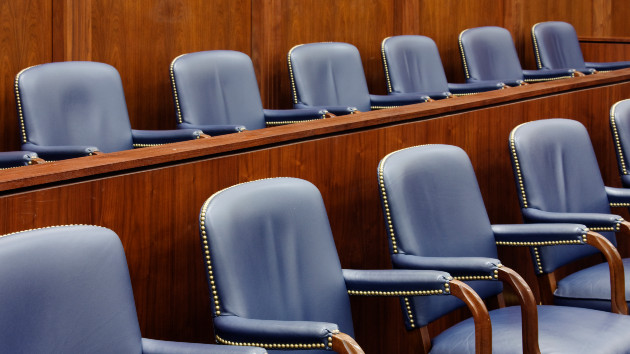 (GRAND RAPIDS, Mich.) — A jury found two men not guilty Friday on charges connected to an alleged plot to kidnap Michigan Gov. Gretchen Whitmer and a mistrial was called on two remaining suspects after the jury was deadlocked on their charges.

Adam Fox, Barry Croft Jr., Daniel Harris and Brandon Caserta were all arrested in October 2020 following an FBI sting operation against a militia group of which they were alleged members, and had openly protested Whitmer’s COVID-19 policies. All four were charged with kidnapping conspiracy. Fox, Croft and Harris were also charged with conspiracy to use a weapon of mass destruction.

The jury was deadlocked on all the counts against Adam Fox and Barry Croft. The judge declared a mistrial on those charges for those men.

The jury found Daniel Harris and Brandon Caserta not guilty on all counts of conspiracy to commit kidnapping. Harris was also found not guilty of weapons of mass destruction and unlawful firearm charges.

Whitmer’s office released a statement after the verdict thanking the investigators and prosecutors for their work but said the plot was “the result of violent, divisive rhetoric that is all too common across our country.”

“There must be accountability and consequences for those who commit heinous crimes. Without accountability, extremists will be emboldened,” her office said in a statement.

Two other suspects who were allegedly part of the conspiracy, Kaleb Franks and Ty Garbin, were also arrested and later pleaded guilty to weapons and conspiracy charges.

Federal prosecutors alleged the group had meticulously planned to kidnap the governor and hold her hostage along with others at the state Capitol in Lansing. Investigators said the men allegedly acquired weapons, ammunition and materials for explosives and conducted surveillance of the governor’s home.

“The evidence proves all of them were already willing to commit the crime,” U.S. Attorney Nils Kessler said during closing arguments on April 1.

Undercover FBI agents infiltrated the group and recorded conversations of their alleged plotting.

The suspects’ attorneys contended that their clients did not intend to kidnap Whitmer and they were coerced by the FBI agents.

Defense attorney Christopher Gibbons told the jury that the government’s claims that Fox was the ringleader of the operation were unfounded.

Prosecutors argued that they did not entrap any of the men accused because investigators saw the men had an alleged pattern of anti-government and hateful rhetoric, and that they were serious about carrying out the plot if they were not stopped.

Javed Ali, the former senior counterterrorism leader on the National Security Council, said Friday’s verdicts were a significant legal development when it comes to federal prosecutions.

“In a post-9/11 counterterrorism world, the Department of Justice has rarely lost high profile counterterrorism cases based on successful entrapment claims, and this development punches a hole in that relatively unblemished track record the past two decades,” he told ABC News. “It may also give momentum to other anti-government groups and extremists who believe in similar causes like those pursued by the individuals in this case.”

This is a developing story. Check back for updates