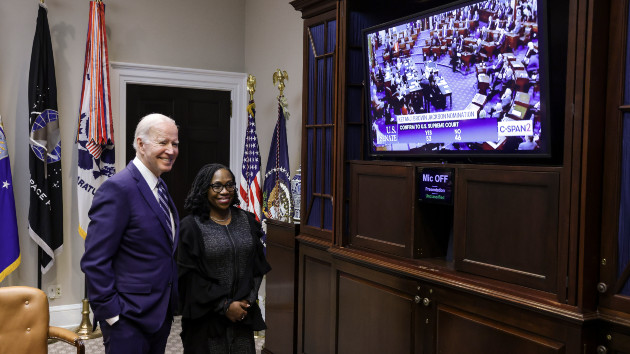 (WASHINGTON) — President Joe Biden will celebrate Judge Ketanji Brown Jackson’s confirmation to the Supreme Court at a large-scale event at the White House on Friday amid new concerns about COVID spreading among Washington’s power players.

Jackson’s Senate confirmation by a 53-47 bipartisan vote Thursday marked a big political win for Biden’s long-term legacy — and his short-term efforts to energize Democrats. But a cluster of positive COVID cases since Monday, including some like House Speaker Nancy Pelosi, who have had contact with Biden, has raised questions about whether the celebration could turn into a superspreader event.

Jackson, the first Black woman nominated and confirmed to the Supreme Court in its 233-year history, joined Biden in the Roosevelt Room Thursday afternoon to watch Democratic senators and other supporters break out in applause when Vice President Kamala Harris announced the vote.

Besides Biden, Harris is scheduled to deliver remarks at the outdoor event on the White House South Lawn in what will be a powerful image of the first Black female vice president alongside the first Black woman to soon sit on the Supreme Court. The White House said Jackson will speak as well.

But what should be considered a celebration for Democrats and the Biden White House risks being overshadowed by the pandemic Biden said this week is “under control.”

A growing number of Washington officials have tested positive for COVID, including two Cabinet members, two White House staffers, and at least 13 members of Congress.

Harris was in “close contact” with her communications director who tested positive, she but presided over Jackson’s vote in the Senate chamber without a mask just two days later. According to guidance from the Centers for Disease Control and Prevention, someone deemed a close contact should “wear a well-fitting mask for 10 full days any time you are around others inside your home or in public.”

“After consulting with a White House physician and reviewing CDC guidance, which we do for all engagements, the Vice President presided over the Senate while practicing social distancing — with limited and brief interactions from her chair. In addition, the Vice President tested negative today, and will continue to maintain strong protocols and follow the CDC’s guidance,” a White House official told ABC News.

The highly transmissible BA.2 variant appears to be closing in on Biden, 79, after he also appeared with Pelosi at two White House events this week — even sharing a kiss at one — prior to her positive COVID test.

Some 200 guests were invited to Friday’s ceremony including Jackson’s family, all current and former Supreme Court justices, Cabinet members, some members of the House, Democratic members of Congress from Florida — Jackson’s home state — and all 53 senators who voted for Jackson’s confirmation. No justices will attend, however, ABC News has been told.

While Biden is sure to want Republicans on hand for the victory lap as he aims to shore up the court’s credibility and Jackson’s vote, all three who voted for Jackson won’t be there. Sen. Susan Collins of Maine won’t be attending after she also tested positive for COVID this week, Sen. Lisa Murkowski was traveling to Alaska and Utah Sen. Mitt Romney, who gave Jackson a standing ovation in the Senate chamber, won’t attend either, his office said, but didn’t explain why.

The White House insists it won’t be a repeat of former President Donald Trump’s infamous and maskless Rose Garden event in October 2020 at which he nominated Amy Coney Barrett to the court, but with hugging and maskless photos likely a part of Friday’s festivities, the White House risks appearing at odds with CDC protocols and public messaging it has touted.

While the White House has said Biden and his inner circle follow the strictest COVID protocols for safety, Kate Bedingfield, the White House communications director, notably is now acknowledging that it’s possible the president will test positive for COVID “at some point.”

“The president is vaccinated and double boosted, and so protected from severe COVID. We take every precaution to ensure that we keep him safe, we keep the vice president safe, the first lady, second gentleman, our staff here,” she said on CNN Friday morning. “But, you know, it is certainly possible that he will test positive for COVID and he is vaccinated, he is boosted and protected from the most severe strains of the virus.”

While masks are no longer required at the White House, senior administration officials say the president continues to be tested regularly and people meeting with him are also required to be tested. All White House employees also undergo regular testing.

When pressed on Thursday by ABC’s Senior White House Correspondent Mary Bruce if those protocols also apply for other individuals meeting with the president, such as invited guests, White House press secretary Jen Psaki said they assess each event on a “case-by-case” basis.

“Now, if you are at an event, obviously there are assessments made on a case by case. But if somebody is going to be in close proximity, standing next to him, sitting next to him on a stage, that would be obviously different than a broad group of attendees,” she said.