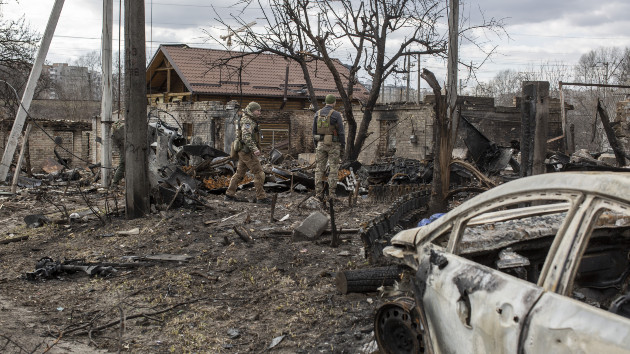 (NEW YORK) — Russian President Vladimir Putin’s “special military operation” into Ukraine began on Feb. 24, with troops crossing the border from Belarus and Russia. Moscow’s forces have since been met with “stiff resistance” from Ukrainians, according to U.S. officials.

Russian forces retreated last week from the Kyiv suburbs, leaving behind a trail of destruction. After graphic images emerged of civilians lying dead in the streets of Bucha, U.S. and European officials accused Russian troops of committing war crimes.

European Union leaders said on Wednesday they were preparing a new round of economic sanctions against Russia, as outrage grew over civilian deaths in Bucha.

“We have all seen the haunting images of Bucha. This is what is happening when Putin’s soldiers occupy Ukrainian territory,” European Commission President Ursula von der Leyen said on Wednesday. “They call this liberation. I call this war crimes. The Russian authorities will have to answer for them.”

The sanctions to be proposed may include a ban on importing Russian coal, bans on transactions with four Russian banks, and a ban on Russian ships at EU ports, among other measures.

The fifth round of sanctions “will not be our last,” von der Leyen said. U.S. officials are also expected to announce new sanctions on Wednesday, sources told ABC News.

Russian forces are continuing their airstrikes in Mariupol, the besieged Ukrainian port city, the U.K. Ministry of Defense said on Wednesday.

“The humanitarian situation in the city is worsening,” the ministry said. “Most of the 160,000 remaining residents have no light, communication, medicine, heat or water.”

Russian troops have prevented humanitarian access to the southern city, a move the ministry said was a part of a strategy to pressure Ukraine to surrender.

Apr 06, 12:11 am
US concedes Russia won’t be expelled from Security Council

That’s separate from the push to remove Russia from the U.N. Human Rights Council, which Thomas-Greenfield said earlier they hope to bring to the U.N. General Assembly for a vote.

“I know we’re going to get” the necessary two-thirds majority, she told CNN.

Thomas-Greenfield also described what it was like in the room Tuesday as Ukrainian President Volodymyr Zelenskyy’s graphic video finally played for the Security Council. She told MSNBC it was the first time she saw the uncensored video of the war’s victims.

“We were all speechless. We had all seen various videos showing atrocities. But they all covered up the real, you know, the real people that were there – they were all blurred,” Thomas-Greenfield said. “This was the first time I’ve seen that video without the bodies being blurred. And it was horrific. And there was silence in the room. I can tell you that people were horrified.”

The U.S. will be sending an additional $100 million in Javelin anti-tank missiles to Ukraine, a White House official confirmed to ABC News. The weapons will be coming from existing military stockpiles.

The White House later released a memorandum from President Joe Biden saying he would be using drawdown powers to release “an aggregate value of $100 million in defense articles and services of the Department of Defense, and military education and training, to provide assistance to Ukraine.”

Pentagon officials have said anti-tank weapons provided by the U.S. and other partner countries have been very successful in staving off Russian troops and bogging down vehicle movement.