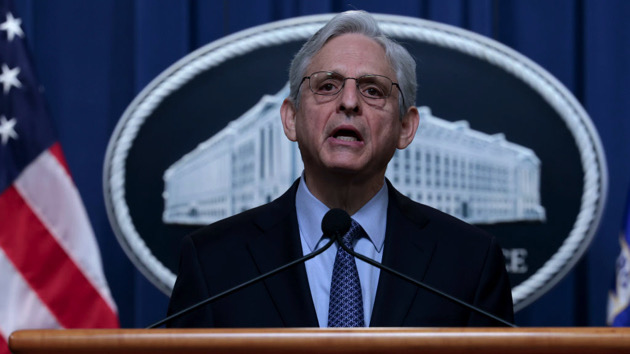 (WASHINGTON) — Attorney General Merrick Garland on Wednesday expressed outrage over the “horrible images” of killed civilians in Ukraine and said the U.S. is working with international partners to identify those responsible.

Garland said investigators are in the “collection of evidence” stage of any war crime prosecution and he is not calling for anything similar to the Nuremberg Trials at this point, but he notably said the Justice Department has a “long history” of helping to hold accountable those who perpetrate war crimes.

“One of my predecessors — Attorney General Robert Jackson — later served as the chief American prosecutor at the Nuremberg Trials,” he said.

Garland told reporters he personally spoke on Tuesday with the Justice Department’s chief prosecutor in Paris who has been meeting with the French war crimes prosecutor.

On Monday, Garland said prosecutors from the department’s Criminal Division met with prosecutors from Eurojust and EUROPOL to “work out a plan for gathering evidence with respect to Ukraine.”

“At the same time, the United States is at the request of the Ukrainian prosecutor assisting in the collection of information with respect to the atrocities that took place in Ukraine and that are still taking place,” Garland said.

“The world sees what is happening in Ukraine.”

Following images out of Bucha and other Ukrainian cities, AG Merrick Garland says U.S. is “assisting international efforts to identify and hold accountable those responsible for atrocities in Ukraine.” https://t.co/GyjVQ5rYNA pic.twitter.com/yItmo9sEkj

His remarks come as the Justice Department on Wednesday announced a myriad of actions against Russian oligarchs and Russian darknet operations.

DOJ charged Russian oligarch Konstantin Malofeyev with sanctions violations, alleging Malofeyev as one of the main sources of financing for Russians promoting separatism in Crimea, and for providing material support for the so-called Donetsk People’s Republic.

These actions are part of the Justice Department’s KleptoCapture Task force, established last month and is aimed at seizing Russian oligarch assets.

“After being sanctioned by the United States, Malofeyev attempted to evade the sanctions by using co-conspirators to surreptitiously acquire and run media outlets across Europe,” Garland told reporters. “We are also announcing the seizure of millions of dollars from an account at a U.S. financial institution, which the indictment alleges constitutes proceeds traceable to Malofeyev’s sanctions violations.”

One of Malofeyev’s co-conspirators, according to DOJ, Jack Hanick a former U.S. television producer, was arrested last month in the United Kingdom where he had been living for violating U.S. sanctions stemming from Russia’s 2014 annexation of Crimea.

The Justice Department also announced the disruption of a global botnet run by the GRU, which DOJ says the Russians have used similar infrastructure to attack the Ukrainians and were able to shut the system down before it was able to be used against thousands of network devices it had reportedly infected.

FBI Director Christopher Wray told reporters the team behind the global botnet was behind some of most infectious cyberattacks in recent memory — including the cyberattacks against the Winter Olympics in 2018, attacks on Ukrainian power grid in 2015 and the attack on the country of Georgia in 2019.

“We’re going to act as soon as we can with whatever partners are best situated to help,” Wray said. “The Russian government has show that it has no qualms about conducting this kind of criminal activity and they continue to pose a threat.”

Garland echoed Wray’s comments, saying, “We were then able to disable the GRU’s control over those devices before the botnet could be weaponized.”

The Justice Department seized a yacht that belongs to Russian oligarch Viktor Vekselberg in Marina Real in the Spanish port of Palma de Mallorca, according to court documents unsealed Monday.