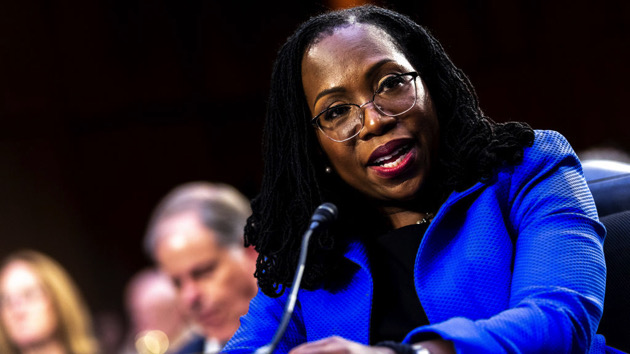 (WASHINGTON) — Three Republican senators — Susan Collins of Maine, Lisa Murkowski of Alaska and Mitt Romney of Utah — have taken the political risk of breaking from their party to vote for Judge Ketanji Brown Jackson’s confirmation to the Supreme Court this week, elevating the first Black woman to the nation’s highest court in its 233-year history.

Democrats on Monday were able to advance Jackson’s nomination out of the Senate Judiciary Committee by a 53-47 vote, with the help of those three Republicans, putting President Joe Biden’s nominee on a clear path to being confirmed later this week by the full Senate.

But it’s unclear if they will face blowback from constituents or colleagues as they continue to explain their reasoning.

Collins was the first Republican to pledge her support to Jackson last week, after meeting twice with the nominee who she said alleviated her concerns. Murkowski and Romney’s endorsements followed on Monday, to the relief of the Biden White House, which had pushed for a bipartisan vote.

Jackson left “quite an impression” on Murkowski during her Judiciary Committee hearings, where “she was put under some pretty, pretty intense scrutiny, and I think you saw grace under pressure there,” Murkowski said.

“There was a level of personal attack that was not warranted,” she added, also calling out corrosive politics around the confirmation process.

“This is an awful process it’s just awful,” Murkowski said. “We’re strapped into it, we’re so divided now. We are to that point where it is almost automatic where if it is a president who is not of my party puts forth a nominee I am somehow obligated to just barely even give consideration.”

Moments after Murkowski announced her intention Monday, Romney followed suit — becoming the only Republican to reverse course and announce plans to support Jackson after previously voting against her confirmation to the U.S. Court of Appeals for the D.C. Circuit last year. He told reporters Tuesday that he got to yes after becoming convinced she’s within the “mainstream.”

“In her previous confirmation votes I had concerns about whether she was in the mainstream and having spent time with her personally and reviewing her testimony before Congress I became convinced that she is in the mainstream,” Romney said.

While Jackson did, then, get the support of Republican Sen. Lindsey Graham, R-S.C., on that vote, Graham said he will vote no this time around, adding that Jackson wouldn’t have been given hearings had Republicans controlled the Senate.

Romney, like Collins and Murkowski, also lamented Tuesday that the process of confirming Supreme Court nominees has becoming increasingly politicized.

“I think, perhaps, we are going to have to reconsider the process that we are going to pursue in the future in part because you could have a setting where you have a president of one party and a Senate of another, and maybe there will be a change,” Romney said. “But at this stage, I was convinced that Judge Jackson is well qualified, intelligent capable, and I became convinced that she is within the mainstream.”

Collins said she was “delighted” to learn that her colleagues had “reached a similar conclusion” on Jackson’s confirmation, adding she’d had “some conversations” with the two before they announced their positions but only learned of their support “earlier yesterday.”

She also raised concerns with the, at times, combative process wrecking the court’s credibility.

“I hope we can get back to a time where we have bipartisan support for qualified Supreme Court nominees because it is important for public confidence in the court,” Collins said. “The court is not supposed to be a politicized institution, and if the nomination process leading up to confirmation is overly political, I believe it undermines the public’s confidence in our courts and regrettably that’s what we’ve seen with the last few nominees.”

While Collins aired concerns with some of Jackson’s sentences, she said in a statement that the fact she “will not agree with every vote that she casts as a Justice…is not disqualifying.”