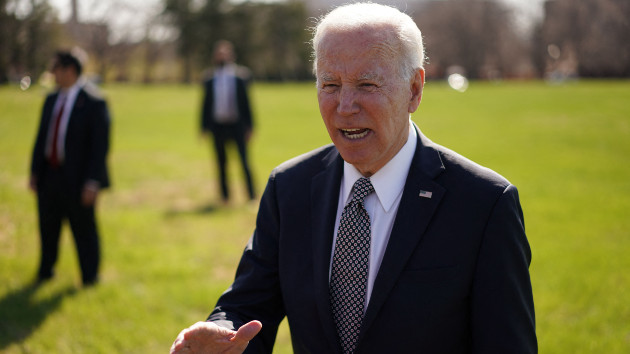 (WASHINGTON) — The killings of Ukrainian civilians committed by Russian forces in Ukraine is a war crime, President Joe Biden said Monday — repeating his accusation that Russian President Vladimir Putin is a “war criminal” who needs to be held “accountable.”

Ukrainian President Volodymyr Zelenskyy accused Russia of “genocide” on Sunday after hundreds of Ukrainian civilians were found killed in Bucha, a suburb of the capital Kyiv that was retaken by Ukrainian forces. Some of the civilians were buried in mass graves, while others were found dead in the street with their hands tied behind their backs.

The U.S. has stopped short of using the term “genocide” because of its strict legal definition and the heavy implications it carries.

“This guy is brutal and what’s happening with Bucha is outrageous. And everyone’s seeing it,” Biden said.

“We have to continue to provide Ukraine with the weapons they need to continue the fight, and we have to gather all the detail so this can be an actual — have a war crimes trial,” Biden told reporters Monday, but when asked if it were genocide, he said, “No, I think it is a war crime.”

Still, Biden’s call for for a possible war crimes trial raises the pressure on the international community’s response to Russia’s war, which has killed thousands and displaced more than 10 million people.

Biden said he would seek more sanctions against Putin and his government over the atrocities in Bucha, although it’s unclear if more economic pressure will do anything to bring an end to Putin’s campaign, which has shifted away from the Kyiv area to the south and east.