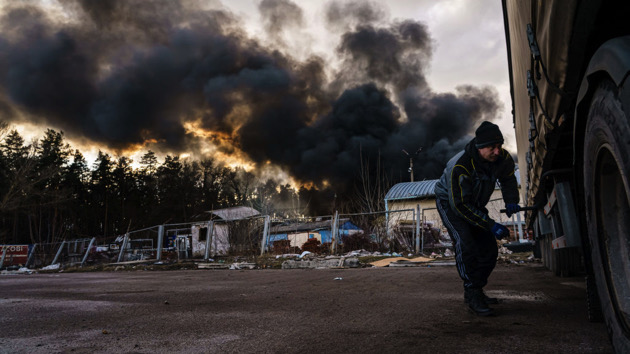 (NEW YORK) — Russian forces are continuing their attempted push through Ukraine from multiple directions, while Ukrainians, led by President Volodymyr Zelenskyy, are putting up “stiff resistance,” according to U.S. officials.

The attack began Feb. 24, when Russian President Vladimir Putin announced a “special military operation.” Heavy shelling and missile attacks, many on civilian buildings, continue in Ukraine’s capital, Kyiv, as well as other major cities like Kharkiv and Mariupol.

More than 4.1 million people have been forced to flee Ukraine since Russian forces invaded on Feb. 24, according to the latest figures from the United Nations Refugee Agency.

The tally from the U.N. High Commissioner for Refugees (UNHCR) amounts to just over 9.2% of Ukraine’s population — which the World Bank counted at 44 million at the end of 2020 — on the move across borders in 36 days.

More than half of the refugees crossed into neighboring Poland, UNHCR figures show.

Russia has accused Ukraine of carrying out airstrikes on the Russian city of Belgorod early Friday.

Belgorod Oblast Gov. Vyacheslav Gladkov said in a statement via Telegram that two low-flying Ukrainian helicopters entered Russian airspace and fired on an oil depot in Belgorod city, setting the building ablaze. Ukraine has yet to comment on the claim.

The depot run by Russian energy giant Roseneft is located about 21 miles north of the border with Ukraine. Two employees were injured but are expected to survive, while all other staff have been safely evacuated from the building, according to Gladkov.

Security camera footage circulating online and verified by ABC News shows an attack on an oil depot in Belgorod. In the video, two airstrikes can be seen in the distance, with a helicopter flying nearby.

Another verified video circulating online shows oil tanks on fire and a massive cloud of smoke billowing from the depot.

Russian news agency Interfax reported that at least two businesses in the village of Severny, just north of Belgorod, were also damaged by an early morning airstrike.

It remains unclear who is responsible for the attacks.

Belgorod, a city of more than 300,000, is about 50 miles north of the Ukrainian city of Kharkiv, which Russian forces have shelled heavily in recent weeks.

An estimated 100,000 civilians remain trapped in Ukraine’s besieged port city of Mariupol despite repeated efforts by Ukrainian officials to evacuate them, according to Petro Andryushenko, adviser to Mariupol’s mayor.

Andryushenko told ABC News on Friday morning that Russia has not confirmed any humanitarian corridors leading out of Mariupol since announcing a localized cease-fire on Thursday to allow civilians to be evacuated.

A convoy of 45 evacuation buses that were sent to Mariupol have yet to reach the southeastern port city because it remains under Russian lockdown, according to Andryushenko, who noted that some people managed to escape by foot or in their own cars.

Russian troops that have begun to withdraw from the ground effort against Ukraine’s capital of Kyiv seem to be heading north to Belarus to regroup before rejoining the fight, the Pentagon said Thursday.

“The best assessment we have – and it’s an assessment at this early stage – is that they’re going to be repositioned probably into Belarus to be refit and resupplied, and used elsewhere in Ukraine,” Pentagon press secretary John Kirby told reporters.

It’s not clear where they might go, but the Donbas region is one candidate, Kirby said.

Roughly 20% of the Russian forces that were designated to move on Kyiv are now repositioning, several U.S. officials said.

Kirby said Russian forces that are apparently leaving the Chernobyl nuclear power plant also seem to be heading toward Belarus, though noted that “indications are not completely clear at this time.”

The Pentagon assesses these troops are leaving to “refit and resupply,” and not due to a health hazard or other crisis at Chernobyl, Kirby said.