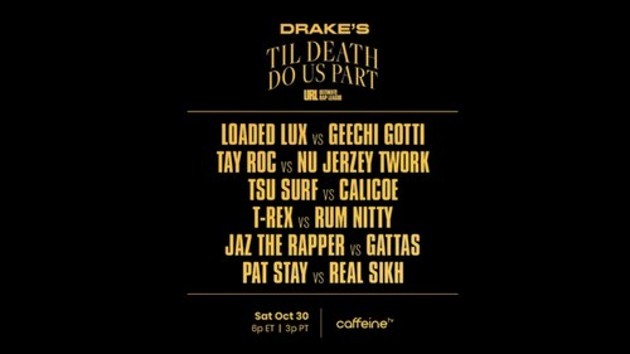 Drake is bringing together twelve of the top battle rappers for a special competition that will be livestreamed on Saturday. He has teamed with the Ultimate Rap League to host Drake’s Til Death Do Us Part.

“I really put this event together because so much time we spend debating in sport, in competition, what would happen if this person had to go up against this person,” Drizzy said in a promo video.

“A lot of the time our debates stem from our dream matchups, and this event, fortunately for us in battle rap, is that exact debate coming to life,” Drake continues. “These are battles that are fueled by rivalry, hate, a true chance to silence all the talking and definitely set up moments that will rewrite legacy and rewrite history for some people.”

“Drake isn’t just a casual battle rap fan and has been a supporter behind the URL movement for years,”  Ultimate Rap League CEO Troy Mitchell says in a statement. “Over the last 20 months, he’s helped our brand grow by facilitating our partnership with Caffeine, which allows us to stream our premium content for free to our fanbase.”

“Drake’s Til Death Do Us Part is not just a birthday celebration for our friend,” Mitchell continues. “It is a shifting of the culture and is going to be the biggest event ever witnessed in battle rap history, bigger even than Summer Madness 2.”

Drake’s Til Death Do Us Part airs live on URL’s Caffeine channel on Saturday, October 30th at 6 p.m. EDT/3 p.m. PDT and will stream exclusively on URL’s app,