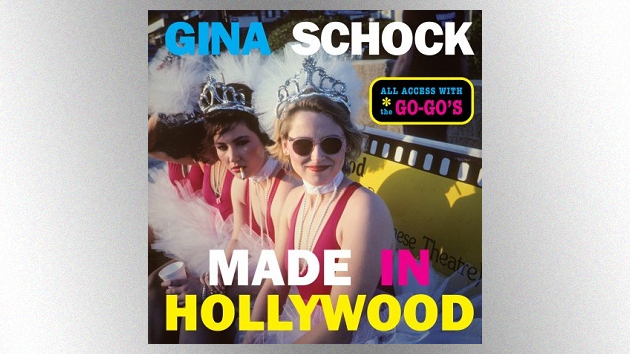 With The Go-Go’s being inducted into the Rock & Roll Hall of Fame this Saturday, drummer Gina Schock has just released a new autobiographical photo book focusing on her long career with the famous all-female group.

Made in Hollywood: All Access with the Go-Go’s is highlighted by a bevy of personal photos that Schock took during the group’s 1980s heyday, as well as a variety archival images.

“I am very, very excited about my book, because it’s my life, and it’s from a band member’s perspective,” Schock tells ABC Audio. “[I]t’s taken me years to put it together. [O]ver 40 years of photographs and tales to tell are in this book.”

Gina notes that during the band’s early years, “I was carrying a camera around with me all the time and snapping shots…everywhere, on the tour bus, in hotel rooms, backstage.”

Schock also wrote commentary to accompany many of the pics in the book.

“I think I recapped things pretty evenly and pretty honestly,” she says. “And people will get an inside look at the band in a way they never have, because it’s being shown to them visually, and I’m writing text to it.”

Made in Hollywood also features essays from the other Go-Go’s, as well as from some of the group’s famous fans and friends, including as The B-52s‘ Kate Pierson, Jodie Foster, Eurythmics‘ Dave Stewart and Paul “Pee Wee Herman” Reubens.

“Everybody was pretty honest and was telling…when they first met the band, what happened, how we first came together,” Schock explains. “It’s great to relive all that.”

Gina says she thinks fans will love the book.

“[T]hey’re gonna look at this and they’re going to remember what they were doing [then],” she maintains. “It’s gonna make people smile.”