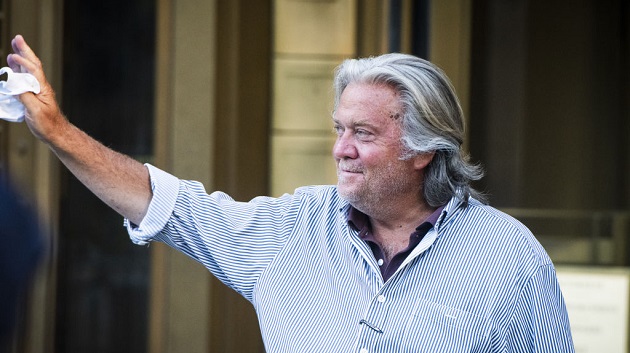 (WASHINGTON) —  The House select committee investigating the Jan. 6 Capitol riot is expected to recommend holding longtime Trump adviser Steve Bannon in contempt of Congress for refusing to cooperate with the panel’s investigation.

Committee members will vote Tuesday evening on whether to send a report recommending contempt charges to the full House. If approved by the full chamber on Thursday, the matter would then be referred to the Justice Department to decide whether to pursue criminal charges.

After President Joe Biden said recently that the Justice Department should prosecute Bannon, White House press secretary Jen Psaki attempted to distance the White House from that action, telling reporters on Monday that Biden “believes it’s an independent decision that should be made by the Department of Justice.”

The matter could take months, if not years, to litigate, and could result in a fine of up to $100,000 and up to one year in prison.

“Though the Select Committee welcomes good-faith engagement with witnesses seeking to cooperate with our investigation, we will not allow any witness to defy a lawful subpoena or attempt to run out the clock, and we will swiftly consider advancing a criminal contempt of Congress referral,” Committee Chairman Bennie Thompson, D-Miss., and Vice Chair Liz Cheney, R-Wyo., said in a statement earlier this month.

The statement came after Robert Costello, Bannon’s attorney, told committee members that his client would not cooperate with the probe given Trump’s executive privilege concerns, or without a court order to do so.

The committee’s report argues that the committee’s efforts to seek information from Bannon are justified because he “had specific knowledge about the events planned for January 6th before they occurred.”

“Mr. Bannon was a private citizen during the relevant time period and the testimony and documents the Select Committee is demanding do not concern discussion of official government matters with the President and his immediate advisors,” the panel wrote in the report, in response to Trump’s claims of privilege.

Several other former Trump aides and associates, including former White House chief of staff Mark Meadows and Kashyap Patel, who served as a senior Pentagon official, continue to negotiate with the committee over cooperation after receiving subpoenas.

It’s not clear if Dan Scavino, one of Trump’s longest-serving aides, will cooperate with the panel’s investigation.

Earlier Tuesday, the former president announced he was suing the committee, as well as the National Archives, to block lawmakers from receiving Trump White House records.

The Biden administration had refuted Trump’s of claim executive privilege, saying that the invocation “is not in the best interests of the United States,” White House counsel Dana Remus wrote in a letter to the National Archives.

As a result, the National Archives notified Trump’s attorney last week that it planned to turn over dozens of records to the committee on Nov. 12, “absent any intervening court order.”