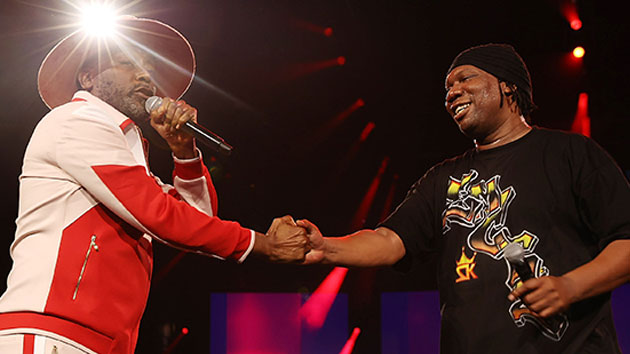 Two of new York City’s legendary rappers, Big Daddy Kane and KRS-One, went one on one Sunday night during the Verzuz battle in NYC.

Fat Joe hosted the 20-round event at Barclays Center in Brooklyn, which kicked off with Big Daddy delivering “Just Rhymin” from his 1988 album, Long Live the Kane.

KRS fired back from the same year with the Boogie Down Productions cut, “I’m Still No. 1.” He continued with “The MC,” “Jack of Spades,” “Outta Here,” “9MM Goes Bang,” “MCs Act Like They Don’t Know” and many more.

Kane blazed through a set list including “Smooth Operator,” “Pimpin’ Ain’t Easy,” “Set It Off,” “Mortal Combat” and “Raw.”

Triller announced there will be a limited commemorative NFT bundle of the ten best all-time Verzuz battle moments, according to Billboard.

“What Swizz [Beatz] and Timbaland have built with Verzuz is an entirely new form of entertainment, one that continues to grow and excite audiences literally around the world,” said Bobby Sarnevesht, co-controlling shareholder of TrillerNet.

“We wanted a way for our fans to be able to own a piece of Verzuz for themselves and tapping into the unique ownability and collectability of NFTs seemed like the perfect way to do that,” he added. “This is the beginning of many exciting Verzuz NFT drops.”

The first Verzuz NFT collectibles will be available for $199 at TrillerNfts.com.