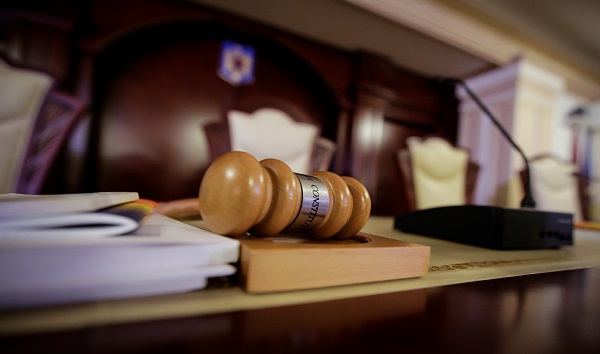 (GLYNN COUNTY, Ga.) — As the trial of three white Georgia men charged with the 2020 murder of Ahmaud Arbery got underway Monday with jury selection, Arbery’s father said he is “focused on justice.”

The first group of prospective jurors was called to the Glynn County, Georgia, Courthouse to begin the arduous task of selecting a panel to hear evidence in the case.

Arbery’s family and their attorneys said they are not taking anything for granted.

“It is a lived experience for Black people in America that we can never take for granted that a white person will be convicted for killing a Black person, no matter how much evidence we have,” Ben Crump, one of the Arbery family’s attorneys, said during a news conference outside the courthouse in Brunswick, Georgia.

‘I know my son was lynched’

Arbery’s father, Marcus Arbery Sr., said he and his family are relying on the prayers of supporters from across the nation to get them through the trial that the lead prosecutor said could take until Nov. 19 to complete.

“I’m focused on justice,” Arbery Sr. said. “I know my son was lynched, lynched by a white mob.”

The three defendants are Gregory McMichael, 65, a retired police officer, his son, Travis McMichael, 35, and their neighbor, William “Roddie” Bryan, 52.

All three defendants have pleaded not guilty to charges of murder, aggravated assault, false imprisonment and criminal attempt to commit false imprisonment stemming from the Feb. 23, 2020, fatal shooting of Arbery in the unincorporated Satilla Shores neighborhood near Brunswick.

Prosecutors alleged Arbery was jogging through the neighborhood when Gregory McMichael saw him and thought he resembled a burglary suspect seen on a security video posted online by his neighborhood association. Gregory McMichael and his son allegedly armed themselves and with guns, and with the help of Bryan chased down Arbery in their pickup trucks, prosecutors said.

Travis McMichael allegedly shot Arbery three times with a shotgun after he was cornered and began fighting with Travis McMichael in the street. The fatal encounter was partially video recorded by Bryan on his cellphone and is poised to be the most significant piece of evidence prosecutors plan to present to the jury.

The McMichaels are claiming they were exercising their right to make a citizens’ arrest under a state law that was repealed following Arbery’s death. Travis McMichael is also claiming he shot Arbery in self-defense, according to his attorney.

Bryan claims he was just a witness to the incident, according to his lawyer. But prosecutors allege he was an active participant in the pursuit of Arbery and that he attempted to use his truck to block Arbery’s path.

In addition to state charges, all three men have been indicted on federal hate crime charges.

About 600 of the 1,000 prospective jurors who received questionnaires in the case were called to the courthouse on Monday to begin voir dire or the process to whittle down prospective the jury pool to 16 impartial people, including four alternates.

About 20 of the would-be jurors spent Monday afternoon answering general questions as a group before lawyers began questioning individual jurors. While Chatham County Superior Court Judge Timothy R. Walmsley, who was appointed to preside over the Glynn County trial, allowed the media to observe and livestream the general questions of the group, he barred cameras from filming questioning of individual prospective jurors.

During the general questioning of the first batch of prospective jurors, 13 of the 20 said they had already formed an opinion on the guilt or innocence of the accused based on pre-trial publicity.

Before the actual questioning of potential jurors began, a hearing was held on what questions prosecutors and defense attorneys will be allowed to asked candidates.

In addition to how much prospective jurors know about the case and whether they can put that aside and decide the case solely on the evidence presented in court, defense attorneys for the McMichaels proposed 30 additional questions. Many of the defense questions pertained to thoughts on racism, the Black Lives Matter movement and whether would-be jurors believe the Confederate flag — which the McMichaels had on their pickup truck — as a symbol of racism.

Linda Dunikowski, the lead prosecutor in the case, objected to more than half of the defense questions, calling them too broad or unrelated to the evidence, including whether prospective jurors supported the Black Lives Matter movement or participated in any social justice demonstrations before or after Arberry’s death.

Walmsley said he’ll allow some of the defense questions, but ruled most of them, including questions on gun ownership, were too broad or would lead prospective jurors to prejudge the evidence.

Walmsley also said he would not allow the attorneys to ask whether the prospective jurors are “concerned about your safety, your reputation, your livelihood if you were to be a juror on this case.” Robert Rubin, an attorney for Travis McMichael, said that was likely the most important question on the list.

“This is a case that has garnered significant attention in this community as well as around the country, and I have no doubt that the 1,000 or so individuals that were summoned when they received that summons, reacted in some way to that,” Walmsley said. “This is not an easy thing for anybody.”