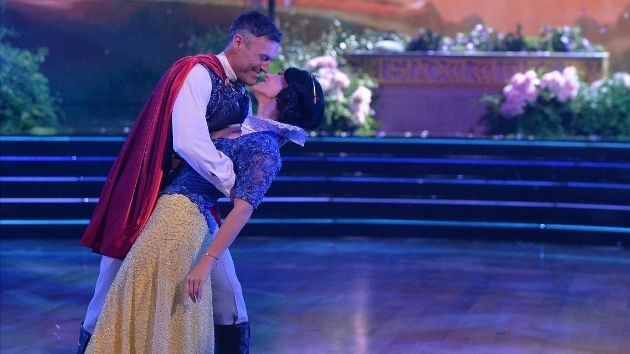 Fans of Dancing with the Stars took a trip to the happiest place on earth when the cast celebrated Disney Heroes Night and saluted animated heroes from Snow White to those who will appear in the upcoming feature, Encanto.

Because the night was full of Disney magic, no one was sent home on Monday.  However, the cast can’t breathe a sigh of relief just yet!  Instead, they have to perfect an entirely different routine for when DWTS returns on Tuesday to celebrate Disney Villains Night.

That meant several competitors turned up the heat to let the audience know they are in it to win the Mirrorball Trophy.  Both NBA legend Iman Shumpert and country singer Jimmie Allen pushed themselves on the ballroom floor and earned the judges’ high praise for their efforts.

Allen, who again tugged on the heartstrings by opening up about losing his dad to kidney failure in 2019, celebrated his father’s life with his Mulan-inspired Paso doble.  The “Make Me Want To” singer also crushed the Mickey Moves challenge, where all competitors had to include a set of specific moves into their routine, and earned himself the first two bonus points of the season.

However, The Office alum Melora Hardin demonstrated the greatest improvement with her dazzling Jungle Book-inspired quickstep that the judges dubbed the best dance of the night.  They handed her the first straight nines of the season for an overall score of 36 out of 40.

Meanwhile, Beverly Hills, 90210 alum Brian Austin Green could be in danger of going home, as he’s currently sitting at the bottom of the pack with a dismal 25 out of 40.  The judges found his waltz to ﻿Snow White﻿’s “Someday My Prince Will Come,” a little TOO romantic and requested that he and partner/girlfriend Sharna Burgess dial it down for next time.

Find out who goes home when Dancing with the Stars celebrates Disney’s fearsome villains when it returns Tuesday at 8 p.m. ET on ABC.