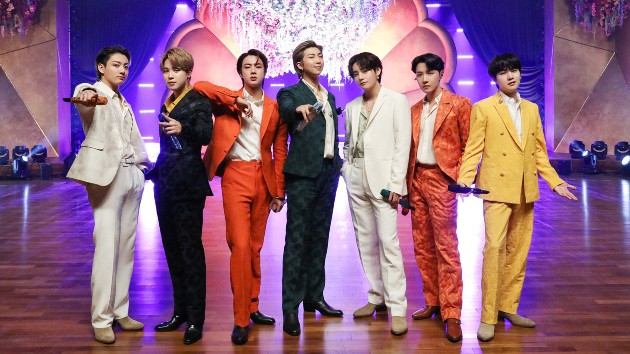 It just might be the ultimate BTS collectible: The outfits and jewelry the group wore to perform “Dynamite” at the 63rd Annual Grammy Awards earlier this year are going on the auction block.

The seven Louis Vuitton ensembles worn by the group for their first-ever solo Grammy performance, plus three rings worn by J-Hope, are just one of the many items up for grabs in the MusiCares charity auction organized by Julien’s Auctions.  As the charitable arm of the Recording Academy, MusiCares provides medical, financial and personal assistance to in-need members of the music community.

BTS’ outfits are estimated to fetch $30,000 to $50,000, while the rings might bring two to four grand. If you’re not a fan of BTS, Katy Perry is selling a silver ensemble she wore to perform “California Gurls” on the 2010 TV special The Grammy Nominations Concert Live! — Countdown to Music’s Biggest Night.

A salmon pink guitar signed and inscribed by Machine Gun Kelly, a 7-inch pink vinyl “Watermelon Sugar” single signed by Harry Styles, a Chromatica CD signed by Lady Gaga and two pairs of boots worn by Demi Lovato are also up for grabs in the auction, which will take place January 30, the day before the 64th annual Grammy Awards on January 31.

For more info on how to register and bid, visit JuliensAuctions.com.