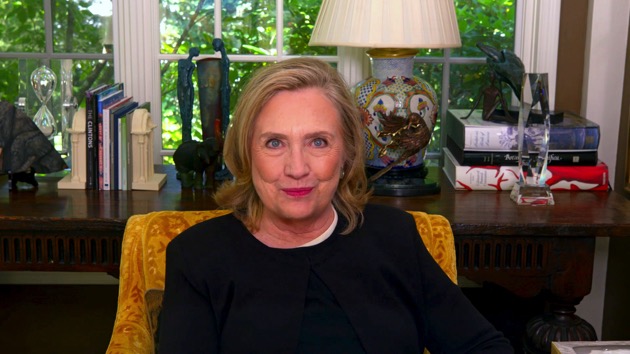 (NEW YORK) — The United States is in the midst of a constitutional crisis, former Secretary of State and 2016 Democratic nominee Hillary Clinton said Monday on The View.

“That gives me absolutely no satisfaction in saying this, because I think we’re at a very dangerous, continuing high-level attack on the legitimacy of our government and the election of our president. Obviously, our former president is not only behind it, he incited it, he encouraged it and he continues to do so,” Clinton said in reference to the insurrection at the Capitol on Jan. 6.

Clinton recently said new and often restrictive voting legislation enacted in Republican-led states is “like the frog dropped into the water. It’s boiling.”

“People are still arguing about stuff that is important, but not as fundamental as whether or not our democracy will be broken and then taken over and minority rule will be what we live under,” she added onstage at the Atlantic Festival.

The narrow Democratic majority in the United States Senate has proven to be a difficulty for President Joe Biden, whose agenda hinges on unanimous support from those in his party. The filibuster is preventing Democrats from passing legislation with a simple majority vote, and the party isn’t in agreement on whether or not the Senate rule needs to be reformed.

Clinton said she would “absolutely” end the filibuster to allow intervention against some of the actions taken in the states, like transferring some of the power of election administration to state legislatures.