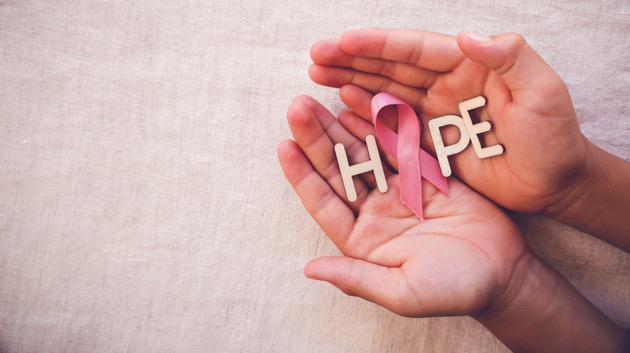 (NEW YORK) — For years, triple-negative breast cancer has been perceived as aggressive with little hope of treatment, but that thought appears to be changing among experts as more promising treatment options develop.

“I would say that the future is bright for triple-negative breast cancer,” said Dr. Erica Mayer, a medical oncologist and senior physician at Dana-Farber Cancer Institute in Boston. “We now have new treatment strategies that we didn’t have available before that definitely seem to be benefiting patients with triple-negative disease.”

Triple-negative disease is a unique class of breast cancer because it lacks receptors that drug therapies can target for treatment. Breast cancer cells can have three different types of receptors — estrogen, progesterone and a protein called HER2 — that are each like the lock on the front door of a house. The keys to these locks are the different hormonal or drug therapies that can gain access and kill the cancer cells. But triple-negative breast cancer does not have those three types of receptors, hence the name. This makes it harder to treat than other types of breast cancers.

While lacking those receptors, triple-negative breast cancer still has the same symptoms as other types. Some of these symptoms are a new lump or mass in the breast or armpit, dimpling of the breast skin, abnormal nipple discharge or even the nipple turning inward.

“Black women are also more likely to be diagnosed with cancer at a young age, so that’s how you might get that association, but it’s not necessarily causative,” said Dr. Kimberly Lee, a medical oncologist in the Breast Oncology Department at Moffitt Cancer Center in Tampa, Florida. “There’s no simple answer to that.”

Although completely eliminating these risk factors doesn’t guarantee you wont get breast cancer, doing so can help lower the risk. “Decreasing those risk factors as much as possible will decrease your risk,” said Lee. “Again, it doesn’t go to zero.”

According to experts, triple-negative can be a very treatable and potentially curable type of breast cancer, especially with recent research advances. Treatment of triple-negative breast cancer involves both local therapies, such as surgery and radiation, and can also include systemic therapies, like chemotherapy. Thanks to research in recent years, another category of medications is available, known as immunotherapy, where medicines help stimulate the immune system to destroy cancer cells. This category of medication is used with chemotherapy and is used depending on factors, such as the stage of the cancer.

New discoveries, such as immunotherapy, are starting to change the previous beliefs that triple-negative breast cancer is untreatable, experts say.

“We are incredibly gratified to see that offering immunotherapy before surgery not only helps to do a better job killing the cancer cells, but also seems to help prevent the cancer from coming back, which may help people live longer,” said Mayer. “So the introduction of immunotherapy into the treatment of triple-negative breast cancer may be a game changer.”

October is Breast Cancer Awareness Month, but experts say it’s important to be aware of any changes to your breasts and get year-round screening.

Experts recommend mammograms starting at age 40. How frequently and how early to be screened depends on your own individual risk, making it important to see a health care professional to determine your risk and when to begin screenings. In the meantime, everyone should be aware of any changing symptoms in their breasts.

“It’s also important to be aware of one’s body and notice any changes, pointing them out to one’s doctor if they arise,” Mayer said.

Finally, experts say that it is very important to know your family history, which could influence your own risk of breast cancer. “For a long time, cancer was taboo, and people didn’t talk about cancer,” said Lee. “But your family history is important, because again, that could put you at higher risk.”

Triple-negative breast cancer is becoming more treatable as more discoveries are being made, giving hope to experts and those living with the disease.

“I meet people every day and they think it’s the end that we don’t have treatment, that we can’t help them and as an oncologist, that’s not the case,” said Lee. “There is hope.”