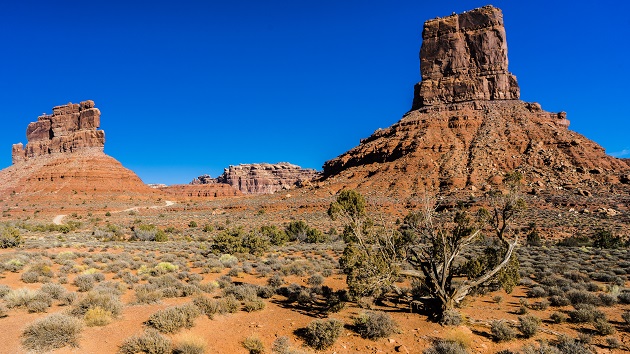 (WASHINGTON) — President Joe Biden has restored the original boundaries of three U.S. national monuments that had their size drastically reduced by former President Donald Trump, saying Friday that Americans must protect the country together.

“These protections provide a bridge to our past, but they also build a bridge to a safer, more sustainable future,” he said.

The White House said Biden’s move “is fulfilling a key promise and upholding the longstanding principle that America’s national parks, monuments, and other protected areas are to be protected for all time and for all people.”

The orders Biden signed on Friday, alongside Interior Secretary Deb Haaland, restore Bears Ears and Grand Staircase Escalante national monuments in Utah to their original boundaries and will restore protections to the Northeast Canyons and Seamounts Marine Monument in Rhode Island. Biden joked that making the changes “might be the easiest thing I’ve ever done so far as president.”

Haaland, the first Native American to ever serve as a Cabinet secretary, played a leading role in encouraging the restoration of the original boundaries.

“Thank you Mr. president, for the profound action you are taking today to permanently protect the homelands of our ancestors. Our songs, our languages, and our cultures are strong, and many people from many Indian tribes have sung and spoken in unison to protect this sacred place,” she said.

The monuments were created by former President Barack Obama using the Antiquities Act, which allows presidents to create national monuments. Trump was the first president to use that law to reduce protections for a monument.

Trump drastically reduced the size of the two Utah monuments in 2017, calling it an overreach of power to put so much land and resources under the control of the federal government. Native American tribes, conservation groups and scientists opposed the decision, saying the area needed protections to preserve the historic sites and sensitive ecosystems.

Utah Gov. Spencer Cox, a Republican, confirmed reports about Biden’s move in a statement on Thursday, saying he’s disappointed about the decision.

Biden said he spoke to both Utah senators — Republicans Mitt Romney and Mike Lee — about the decision.

“The protection of public lands… must not become, I should say, a pendulum that swings back and forth depending on who’s in public office. It’s not a partisan issue,” Biden said in remarks Friday.

Conservation groups applauded Biden’s decision to restore the original boundaries of the monuments, saying it will preserve the important natural, historical and cultural resources in the area and shows respect to Native American tribes who first called for the creation of Bears Ears National Monument.