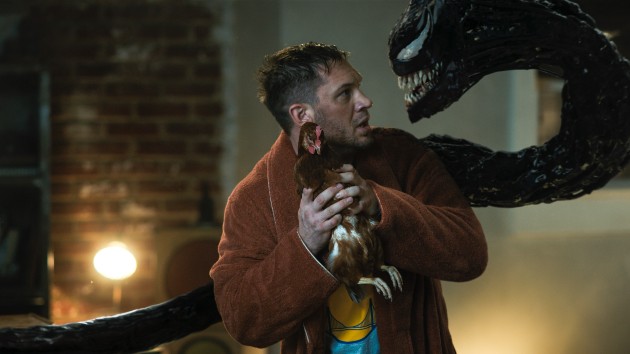 When it came to the box office, Venom: Let There Be Carnage certainly lived up to its name.

Sony’s comic-book movie sequel — which was produced in association with Marvel Studios — was easily the biggest film of the weekend, debuting at number one with an impressive $90 million three-day total.

Venom 2‘s haul is the biggest theatrical opening since the COVID-19 pandemic began in March 2020. That record previously belonged to Marvel’s Black Widow, which opened with over $80 million.

Venom 2 also bests the $80 million pre-pandemic bow posted by the first Venom movie, which introduced us to Tom Hardy‘s take on the Spider-Man universe anti-hero back in 2018. Along with Hardy, Oscar-nominee Michelle Williams reprises her role in the sequel, while Woody Harrelson and Naomie Harris lead the additions to the cast.

Marvel’s Shang-Chi and the Legend of the Ten Rings, which had led the box office for four straight weeks, finally fell from the top spot to number three, adding another $6 million to its total, which now stands at over $200 million.

The animated family feature The Addams Family 2 slipped into the number-two spot with an $18 million opening. On the other side of the family-friendly spectrum, The Many Saints of Newark — a prequel to HBO’s iconic series The Sopranos, featuring the late James Gandolfini‘s son Michael as a young Tony Soprano — bowed at number four, with $5 million.