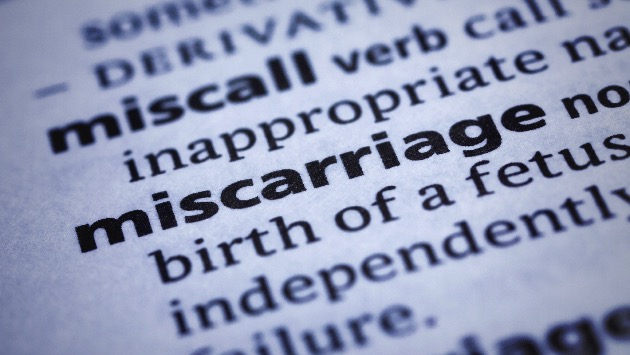 (NEW YORK) — When Sarah Smith experienced three miscarriages in less than two years, she suffered through each of them while at work.

“I didn’t ever feel like there was a space to talk about it with anybody,” Smith, now a mom of three, told “Good Morning America.” “It’s not listed like in your benefits, like if you suffer pregnancy loss, you can take time off, so nobody’s even talking about it.”

During one miscarriage, Smith, of Washington, D.C., remembers sitting at her desk in an open office, trying to pretend like nothing was wrong.

“I went through the day having meetings and talking to people while in excruciating pain, just waiting for the day to be over,” she said. “And every time I got up to go to the bathroom, I was petrified that there would be blood.”

During another, Smith said she sat at work while awaiting a scheduled dilation and curettage (D&C), a medical procedure performed to clear the uterine lining after a miscarriage, because she did not know how to talk about it with her employer.

Smith said the experience of suffering three miscarriages at work led her to change careers. She now works for the March of Dimes, a nonprofit organization focused on the health of moms and babies.

“You’re just in this place where you’re like, ‘I don’t know what I’m supposed to do here,'” she said of her past experiences. “You just are kind of suffering in silence.”

When Hannah Crowder, of California, suffered her first miscarriage, she said she continued to work because she had no available time off.

“I remember going [to the doctor] at 9:30 in the morning, not hearing a heartbeat, knowing it was going to be a miscarriage and having to go back in to to teach my afternoon classes,” said Crowder, a teacher and now the mom of a 4-year-old daughter. “I ended up having to have a D&C, so that was a day of missed work and then had to go back to the work the next day.”

“I don’t think people who haven’t experienced loss understand how invasive it really is if you end up having to have a D&C,” she said. “I had to wake up the next day like, ‘OK, I have 12 fourth-graders I have to go teach about American history today,’ and just turn that switch back on in my brain.”

As many as 20% of known pregnancies end in miscarriage, according to the Mayo Clinic.

Stillbirth, the loss of a baby after 20 weeks of pregnancy, happens in around 24,000 births each year, according to the Centers for Disease Control and Prevention (CDC).

Both forms of loss are emotionally devastating and physically painful for those who endure them, yet there is relatively little support around pregnancy loss in society today, and especially in the workplace.

“I would find out that morning that I wasn’t pregnant or in the case of a miscarriage that I had, and I had to go right back on the campaign trail,” she told “GMA.” “I was still working my job and in the Senate and I was campaigning at the same time, so it just became so overwhelming and so emotional.”

“I thought, ‘This is crazy that women have to go through this and try to deal with all of this,'” added Duckworth, who in 2018 became the first U.S. senator to give birth while in office, when she delivered her second daughter.

Duckworth is now the co-author of the Support Through Loss Act, a bill she introduced in the Senate in July that would require U.S. employers to provide at last three days of paid leave to workers to address their own health needs or the health needs of a partner following a pregnancy loss, as well as an unsuccessful assisted reproductive technology procedure, a failed adoption or surrogacy arrangement or a medical diagnosis or event that impacts pregnancy or fertility.

The bill, introduced in the U.S. House by Rep. Ayanna Pressley (D-Mass.), also proposes a $45 million annual investment in pregnancy-loss research at the National Institutes of Health (NIH) and a federal public information campaign to share information on both how common pregnancy loss is, and how people can be supported.

“I remember being in my doctor’s office after he said my pregnancy had failed. I was devastated and at the same time my doctor was saying, ‘It’s fine. It’s perfectly normal,'” recalled Duckworth. “I didn’t know that so many pregnancies could fail. Having that information I think would really help all our families who are going through the process of trying to get pregnant.”

Duckworth and Pressley’s legislation calls for employers to provide “at least” three days of paid leave, and advocates say it’s a step in the right direction towards employers recognizing the long recovery for a pregnancy loss.

“As a federal mandate, it’s at least a good start because in too many situations some workers have no accommodations,” said Stacey D. Stewart, CEO of March of Dimes, which has endorsed Pressley and Duckworth’s legislation. “We have to understand that when we don’t provide these accommodations, there’s a real cost in productivity.”

“The idea that women go through a miscarriage or stillbirth and just bounce back immediately and go back to work is just simply unrealistic,” said Stewart.

Many of the causes of miscarriage and stillbirth are still not known or understood.

People who have gone through either form of pregnancy loss though know the toll it takes on the body, in addition to the emotional trauma.

In the case of a stillbirth, a person goes through childbirth, delivering the baby.

“I still delivered a four-pound baby,” said Elizabeth O’Donnell, a former teacher who said she was denied paid leave after her daughter, Aaliyah Denise, was born stillborn in December, after a 48-hour labor. “I wanted to be recognized as having a baby, which I still did, and have the time to heal my body back.”

“But these things are just not spoken about,” she said.

With miscarriage, people may experience bleeding, cramping, diarrhea and nausea while the pregnancy tissue is expelled. Some people may need a surgical treatment like a D&C, which is done in an operating room under anesthesia to remove pregnancy tissue, according to the American College of Obstetricians and Gynecologists (ACOG).

In many cases, it takes as long as four to six weeks for a person’s body to recover from a miscarriage.

“It can be an extremely painful experience for a family and it not only takes time for a pregnant person’s body to recover from a miscarriage or stillbirth, it can take even longer sometimes to recover emotionally,” said Stewart. “It’s often painful for families to even share with others what they’ve been going through.”

For people who are not comfortable sharing with their employer that they are trying to get pregnant, a fearful topic of conversation that can keep people silent in the workplace, Duckworth noted the Support Through Loss Act would provide them a layer of protection on the federal level.

“It’s important that it’s federal [in] that it does offer that protection much earlier in the process,” she said. “This is just sort of bringing the humanity back into our leave policies and more protections for families that are trying to get pregnant.”

Introduced four months ago, the legislation is still far from becoming law. If it were to be enacted, it would leap frog the U.S. from among the worst countries in the world on paid family leave to a pioneering role.

Earlier this year, New Zealand passed legislation that is believed to be among the first of its kind globally and would also require three days of paid leave after pregnancy loss for both the mother and her partner or spouse.

While a federal paid family leave policy is currently being debated in Congress, under current U.S. policy, the Family and Medical Leave Act (FMLA), employees who qualify can take time off to care for a newborn or loved one or recover from illness without fear of losing their job, but in most cases the leave is unpaid.

Only about one-fifth of employees in the private sector have access to paid family and medical leave, according to the National Partnership for Women and Families.

And data shows that access to paid leave is lower for Black workers than their white counterparts, while the risk of miscarriage is 43% higher for Black women, according to a study published this year in The Lancet, a medical journal.

According to Pressley, the Support Through Loss Act would apply to both federal and private employers and would supplement current paid leave policy.

“These three days would be a separate layer of leave protections than those set in paid family and medical leave,” she said. “We have to ensure within those paid leave policies … that we’re not leaving behind families who have experienced pregnancy loss.”

Pressley, one of the founding members of the Black Maternal Health Caucus, said her goal with the Support Through Loss Act is to not only ensure people have time to recover, but also have support and information.

“I was unaware of the fact that there are doulas who can support you through pregnancy loss, and I’d be willing to bet that there are many healthcare professionals that might not be aware of that resource,” she said. “So we have to close that gap, make sure the information is more easily accessible, again, to better support those when they’re already in the midst of what is a traumatic and very isolating experience, and make sure that those supports are culturally responsive and holistic.”

The potential for not only paid time off but also recognition from the government and employers that pregnancy loss is both common and serious cannot come soon enough for people like Abby Mercado, who suffered a miscarriage three years ago while working in a nearly all-male office.

“I went to work because why wouldn’t I? Experiencing a pregnancy loss is just not something we talk about,” said Mercado, who went on to co-found Rescripted, an online infertility support community. “But my miscarriage was one of the hardest things I’ve ever had to go through in my life. From a grief perspective, I still grieve it, and from a physical perspective, it hurt.”

“With an effort like [the Support Through Loss Act], it elevates the conversation and one by one the dominoes start to fall and women are finally able to really advocate for themselves and have the government backing them up as they’re advocating for themselves,” she said.