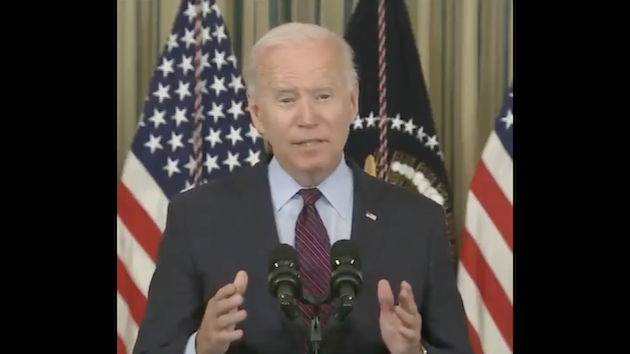 (WASHINGTON) — Two weeks before the “calamity” Treasury Secretary Janet Yellen predicts could strike by Oct. 18, President Joe Biden on Monday blasted Republicans for “playing Russian roulette with the U.S. economy” in refusing to join Democrats to raise the debt ceiling so the U.S. does not default on its debt for the first time ever.

“The Republicans in Congress — what they are doing today is so reckless and dangerous in my view. Raising the debt limit is It’s about paying what we already owe, what has already been acquired. Not anything new,” Biden said. “The United States is a nation that pays its bills and always has. From its inception, we have never defaulted.”

“Not only are Republicans refusing to do their job, they are threatening to use their power to prevent us from doing our job, saving the economy from a catastrophic event. Frankly, I think it’s hypocritical, dangerous, and disgraceful. Their obstruction and irresponsibility knows no bounds, especially as we are clawing our way out of this pandemic,” he continued.

Biden’s amping up the pressure on the GOP to get on board comes ahead of Senate Republicans planning to block another bill down this week to raise the debt limit — an issue lawmakers have historically come together on for years.

Democrats are trying to pass a straightforward debt limit hike on their own with 50 votes — and no Republican support. But Republicans are filibustering the Democratic strategy — requiring 60 votes to move forward — and insisting that Democrats raise the debt ceiling through the much more complicated process of budget reconciliation that Biden says could involve hundreds of votes that could mean it wouldn’t get in time to avoid catastrophe.

Republicans have said they won’t support spending on Biden’s agenda, while Democrats are reiterating the point that raising the debt ceiling does not authorize new government spending but allows the government to pay for spending that previous politicians have already OK’d — including former President Donald Trump and then-Senate Majority Leader Mitch McConnell.

Biden seized on that point.

Pres. Biden: “The reason we have to raise the debt limit is, in part, because of the reckless tax and spending policies under the previous Trump administration. In four years, they incurred nearly $8 trillion in additional debt.” https://t.co/UkSrTz2XPz pic.twitter.com/9Y6Yh0Vphj

“Raising the debt limit is usually a bipartisan undertaking. And it should be. That is what is not happening today,” Biden said. “The reason we have to raise the debt limit is in part because of the reckless tax and spending policies under the previous Trump administration.”

“Republicans in Congress raised the debt three times when Donald Trump was president. Each time the Democratic support. Now they won’t raise it. Even though they are responsible for more than $8 trillion in bills incurred in four years under the previous administration,” he claimed.

He called on Republicans to allow Democrats to hold a vote this week without “procedural tricks,” he said, because at this point, “We are not expecting Republicans to do their part.”

“We are simply asking them not to use procedural tricks to block them from doing the job they won’t do. A meteor is headed for our economy,” Biden said. “You don’t want to help save the country? Get out-of-the-way so you don’t destroy it.”

Asked following his remarks if it’s possible the U.S. will not pay its debt, Biden said he couldn’t guarantee it.

“I can’t believe that will be the end result because the consequence is so dire. I don’t believe that. But can I guarantee it? If I could, I would, but I can’t,” he said, before leaving the room.

Biden gave a warning to Americans on the effects they could feel in the coming days.

“In the days ahead, even before the default date, people may see the value of their retirement accounts shrink. They might see interest rates go up, ultimately raising their mortgage and car payments. The American people, look, just say it this way. As soon as this week, your savings and your pocketbook could be directly impacted by this Republican stunt,” he said.

The impassioned plea echoed the treasury secretary’s at a hearing last week, where she warned raising the debt ceiling is “necessary to avert a catastrophic event for our economy.”

“It has nothing to do with future programs of payments, it’s entirely about paying bills that have already been incurred by this Congress, in previous Congresses, and it’s about making good on past commitments — as you said, paying our credit card bill,” Yellen said in a hearing last week.

While lawmakers came together and voted to avoid a government shutdown, Democrats were forced to remove language from that bill that would have also raised the debt ceiling as Republicans argue they’ll have to go at it alone through the budget reconciliation process.

McConnell, in a letter to Biden ahead of his remarks, reiterated his party’s opposition to helping Democrats and warned the president that it is time for him to “engage directly” with Democrats in Congress on raising the debt limit by themselves.

“Your lieutenants in Congress must understand that you do not want your unified Democratic government to sleepwalk toward an avoidable catastrophe when they have had nearly three months’ notice to do their job,” McConnell wrote.

“Bipartisanship is not a light switch that Speaker Pelosi and Leader Schumer may flip on to borrow money and flip off to spend it,” he continued. “We have no list of demands. For two and a half months, we have simply warned that since your party wishes to govern alone, it must handle the debt limit alone as well.”

The party standoff comes in an extremely polarized environment, when lawmakers are also debating passing one of the largest government spending packages in history, Biden’s approximately $2 trillion Build Back Better agenda and the $1.2 trillion bipartisan infrastructure deal.

Biden reiterated in his remarks that raising the debt limit has “nothing to do with my plan for infrastructure or building back better — zero.”

As the negotiations on Capitol Hill have become intertwined, Republicans insist that if Democrats want to pass such a major spending bill through special budget rules that would require no Republican support, they can raise the debt ceiling on their own, too.

And if lawmakers remain deadlocked on raising the debt ceiling, the government could go into default — essentially, unable to pay bills, directly impacting the wallets of millions of Americans.

“It would be disastrous for the American economy, for global financial markets, and for millions of families and workers whose financial security would be jeopardized by delayed payments,” Yellen warned lawmakers in a hearing last week.

Senate Majority Leader Chuck Schumer in a “Dear Colleague” letter to his caucus on Monday said a deal must be reached “by the end of the week,” an exceedingly ambitious timetable in the partisan environment.

“Let me be clear about the task ahead of us: we must get a bill to the President’s desk dealing with the debt limit by the end of the week. Period. We do not have the luxury of waiting until October 18th,” he wrote.

Schumer also threatened to scrap the Senate’s recess next week if the GOP doesn’t help them rase the debt limit.

Currently, the federal debt is at $28.43 trillion, according to the Peter G. Peterson Foundation’s tracker. The current debt ceiling is actually $28.4 trillion — underscoring the pressure Yellen is under to continue paying the bills through “extraordinary measures.”