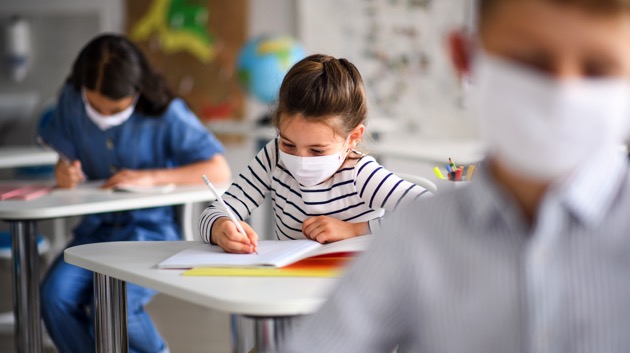 (NEW YORK) — With schools back in session again, many parents around the country on edge — dreading the news of a positive coronavirus case in their children’s classes.

Coronavirus outbreaks have led to hundreds temporary school closures across the country, with tens of thousands of students forced to quarantine, just within the first weeks of school year.

With more than 48 million children under the age of 12 still ineligible to be vaccinated, and another 14 million eligible adolescents still unvaccinated, the quarantine process has left many families and educators frustrated at the prospect of another school year spent partially online, disruptions to work schedules and additional childcare expenses.

While many school districts are following guidance from the Centers for Disease Control and Prevention (CDC), which recommends that those who are unvaccinated and had close contact with an infected individual quarantine for 14 days, some are adopting a different approach called “Test to Stay.”

Under that protocol, being adopted by school districts from Utah to Massachusetts, asymptomatic students who are identified as close contacts of an infected student or staffer are allowed to remain in school, provided they take a daily rapid test for seven days, and adhere to other mitigations, such as mask wearing. If the student tests negative, they are cleared to be at school for the day.

It’s a protocol that has yet to be endorsed by the CDC, which is awaiting more data, but has the support of some parents, educators and medical experts.

Here’s what we know:

Test to Stay lauded by educators and experts

The new program has been supported by several studies, including recent findings out of the United Kingdom, which suggests that daily contact testing, following exposure at school, is “a safe alternative to home isolation.” According to the study, the rates of infection in school-based contacts were quite low.

The new protocol is currently used statewide in Massachusetts, and at The Park School, in Brookline, where weekly pool tests are administered for students and staff and the Test to Stay program is used when there is a case.

“We’ve actually had a number of cases, as we’ve come back into the school year,” Scott Young, the head of school at Park, told ABC News.

Outside the school building, socially distanced students, who may have been in contact with a COVID-19 positive person at school, are given rapid antigen tests. It takes 15 minutes for the test to register, and if it comes back negative, students are allowed in class.

Earlier this month, one high school in Tooele, Utah was forced to hold a Test to Stay event after a number of students tested positive. District school officials considered the program a “success” after it detected 30 cases among students when the testing session at Tooele High School.

“Last year, we had so many days where we had kids out of classes. And we see that in our data, we had numbers drop this year. A lot of this comes from our governor saying, our focus is education. We really want our students to be in class. We want our teachers teaching,” Marie Denson, a representative for the Tooele County School District told ABC News.

Such daily rapid testing has been shown to be an effective tool in prioritizing in-person learning, while seeking to maintain a safe learning environment, particularly when layered with additional measures, like masking and good ventilation, according to John Brownstein, Ph.D., an epidemiologist at Boston Children’s Hospital and an ABC News contributor.

“While rapid tests aren’t perfect, they do provide a robust measure of viral shedding which is a key measure of concern when trying to limit spread in a school,” Brownstein said. “If the goal is to keep kids in schools while reducing transmission, rapid tests actually may provide more value. And when you add the issue of improved timeliness and reduced costs, the utility of rapid tests becomes even more obvious.”

Quarantines are highly disruptive, some say

Jami Wolf-Dolan, a psychologist and parent of two young children currently attending an elementary school in Brooklyn, New York, knows firsthand how incredibly disruptive quarantining can be for the entire family, explaining that she is “beyond slammed, right now,” after her son was abruptly shifted to remote schooling, when a classmate became infected in the first weeks of school.

“I have no childcare, I work from home and I have another kid in Pre-K. The impact of this reverberates,” she said.

Across the country, with pediatric coronavirus cases surging, thousands of children are being forced back into quarantine.

While over 21,000 K-12 students have tested positive since the onset of the school year in South Carolina, another 86,000 had to quarantine because of close contact with an infected individual, according to state data. And in Texas, more than 183,000 students have tested positive for the virus, since the onset of the academic year, impacting tens of thousands of other families.

Removing COVID-19 negative students from in-person learning for prolonged periods of time can affect a student’s educational, social and mental well-being, according to educational experts.

“The optimal place for students to learn is in school, because they are social beings, and that human connection is one of the things that is at the foundation, one of the most important components of effective instruction,” said Young. “When students are remote, they lose out on that human connection, on the opportunity to collaborate, the opportunity to work with their teacher closely, for the teacher to really be able to observe them closely.”

Lydia Alvarez, another parent in Brookyln, New York, concurred, explaining that her 7-year old son was forced to quarantine after attending school for only four days. The quarantine was an unwelcome reminder of last year, when remote learning forced her to quit her job to help her son with school.

“He absorbed nothing,” Alvarez told ABC News in regard to the last school year. “The greatest negative impact of homeschooling was a real resistance to learning. There was no joy associated with learning. I feel now that each time he gets yanked out for five days, that joy of learning gets kind of receded.”

“The best way for families to be supported is for them to know that their children can be in school,” Young said.

Mixed support among officials, but parents applaud the efforts to keep kids in school

Dr. Lee Savio Beers, the president of the American Academy of Pediatrics, has expressed her support for the “Test to Stay” approach.

“I think that it can be a really effective strategy to help make sure children are in school as much as possible. Again it has to be in the context of other important strategies, including vaccination and at least for right now masking, but testing can really help us keep our kids in school,” Beers said, testifying before Congress for a House at a subcommittee hearing on pediatric COVID, earlier this month.

The CDC, on the other hand, is not yet on-board with the Test to Stay protocol, awaiting more evidence before endorsing it.

“At this time, CDC does not recommend or endorse a Test to Stay program. CDC recommends all identified close contacts in the K–12 setting follow current quarantine guidance,” the CDC wrote in a statement to ABC News. “However, to gather more information, CDC is working with multiple jurisdictions who have chosen to use these approaches of more frequent testing to allow close contacts to remain in the classroom.”

But for many parents, the Test to Stay program is an effective way for children to experience the critical continuity and regularity of in-person school.

“The reaction of the community has been incredibly positive,” said Young. Parents, he said, “feel both a sense of safety, which is important, and they really do value the fact that their children can be in school, knowing that it is the best place for them.”