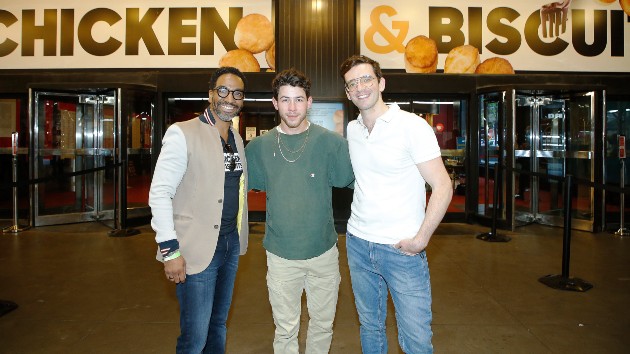 Nick Jonas is currently on tour with the Jonas Brothers, but apparently, he still has time to dabble in theater. He and his wife, Priyanka Chopra Jonas, have just joined the producing team of a new Broadway show called Chicken & Biscuits, which is currently in previews at New York City’s Circle in the Square Theater.

Chicken & Biscuits was written by Douglas Lyons and is directed by  Zhailon Levingston, who at 27 is the youngest Black director in Broadway history. It follows the Jenkins family, who deal with family infighting and secrets while planning their father’s funeral.

Nick has a major background in Broadway, having appeared in productions of How to Succeed in Business Without Really Trying and Les Misérables.  In a statement, he says, “Broadway has always had a special place in my heart, it helped launch my career. And after the last year and a half, Broadway is exactly what we need in this world.”

“This play highlights the importance of love, laughter, and family,” adds Nick, who visited the cast and creative team this past weekend. “It’s got energy, it’s got style, and it’s got heart. The kind of vibe that is so unique to live theater.”

Priyanka notes that this is her first foray into Broadway, but adds, “It’s time we see some more diversity on the stage, and this cast and production team is making history on that front.”

Broadway, of course, is a small world: Nick worked with another Chicken & Biscuits producer, E. Clayton Cornelious, and one of the show’s co-stars, Michael Urie, on the upcoming new movie version of the musical Jersey Boys.  Nick also appeared with Urie in How to Succeed.

Chicken & Biscuits officially opens October 10 for a limited engagement that runs through January 2.