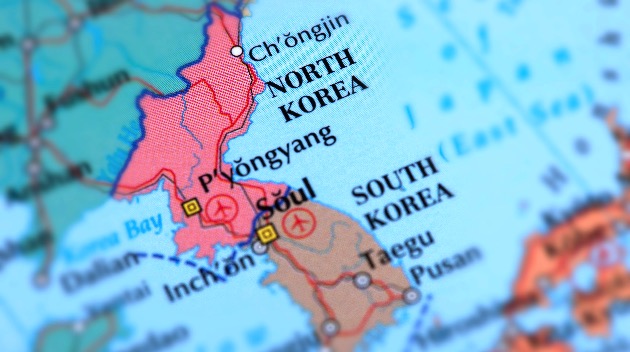 (SEOUL, South Korea) — North Korea fired a short-range missile toward the East Sea early Tuesday, according to its neighboring countries, South Korea and Japan, marking the third such weapons test this month.

Military officials in Seoul, Tokyo and Washington, D.C. were investigating whether the latest missile was ballistic and if it was launched from a submarine. A ballistic missile launch would violate United Nations Security Council resolutions that ban North Korea from engaging in any ballistic activities, though the council typically doesn’t slap new sanctions on Pyongyang for testing short-range weapons.

“The missile was fired from the North’s Mupyong-ri in Jagang Province eastward at around 6:40 a.m,” South Korea’s Joint Chiefs of Staff told reporters on Tuesday. “South Korean and U.S. intelligence authorities are analyzing the launch for additional information.”

There was “no report of damage to Japan’s aircraft or sea vessels,” according to Japanese Chief Cabinet Secretary Katsunobu Kato.

“North Korea’s missile launches pose a serious threat to the safety of our nation and the stability of the region,” Kato said during a press conference on Tuesday morning.

Japanese Prime Minister Yoshihide Suga told reporters on Tuesday that his “government is on high alert and monitoring the situation.”

A spokesperson for the U.S. Department of State condemned the latest weapons test, calling it a “violation of multiple U.N. Security Council resolutions” — a tacit acknowledgment that the United States believes the missile was in fact ballistic.

“We remain committed to a diplomatic approach to the DPRK and call on them to engage in dialogue,” the spokesperson told ABC News in a statement early Tuesday, using the acronym for North Korea’s official name, the Democratic People’s Republic of Korea.

During a press briefing on Monday, State Department deputy spokesperson Jalina Porter told reporters that the U.S. government is “prepared to meet with the DPRK without preconditions, and we certainly hope that the DPRK will respond positively to our outreach.”

Tuesday’s missile launch happened an hour after North Korea’s ambassador to the U.N., Kim Song, delivered remarks at the 76th session of the U.N. General Assembly in New York City, during which he attempted to justify his country’s development of a “war deterrent” to defend against threats from the U.S. and other rivals.

“What we mean by the war deterrent is literally the righteous right to self-defense that can deter aggressive war and defend ourselves,” Kim said. “The possible outbreak of a new war on the Korean Peninsula is contained not because of the U.S.’s mercy on the DPRK, it is because our state is growing a reliable deterrent that can control the hostile forces in an attempted military invasion.”

“North Korea is deliberately offering a condition that the U.S. and South Korea cannot accept so that when negotiations fall apart, they can blame their counterparts,” Moon told ABC News on Tuesday. “As preconditions to resume inter-Korean talks, North Korea told South Korea in a statement last Saturday to consider their missile development as a reasonable act of self deterrence.”

North Korea has been sending mixed messages this year. While test-firing a variety of missiles, Kim Yo Jong, the politically powerful sister of North Korean leader Kim Jong Un, has hinted that Pyongyang is ready to engage in talks with South Korea and formally declare an end to the Korean War.

“South Korea must not try to upset the balance of military force on the Korean Peninsula with such illogical and childish absurd assertion just as the U.S. does,” she was quoted as saying on Saturday by North Korean state media. “I only hope that the South Korean authorities’ moves to remove the tinderbox holding double standards bereft of impartiality, the hostile policy toward the DPRK.”

But Cha Du-hyeogn, an analyst at the Asan Institute for Policy Studies, an independent, non-profit think tank in Seoul, doubted Pyongyang’s will to come back to the negotiation table.

“North Korea never said they are willing to resume talks without conditions,” Cha told ABC News on Tuesday. “The consecutive statements followed by missile provocations can be seen as a double-sided strategy.”

Cha added that Kim Yo Jong is pushing South Korea to convince the U.S. to lift sanctions if the South is so eager to resume dialogue.

“It’s an attempt to incapacitate the U.S.-South Korea cooperation by making use of national, or inter-Korean, cooperation,” he said.

Yang Moo-jin, a professor at the University of North Korean Studies in Seoul, said Pyongyang “is not only testing its missile but also the South Korean government.”

“Pyongyang will wait to see what South Korea has to say about the missile experiment,” Yang told ABC News on Tuesday, “after Kim Yo Jong insisted that South Korea get rid of the double standards on North’s weapons tests if they want inter-Korean dialogue.”