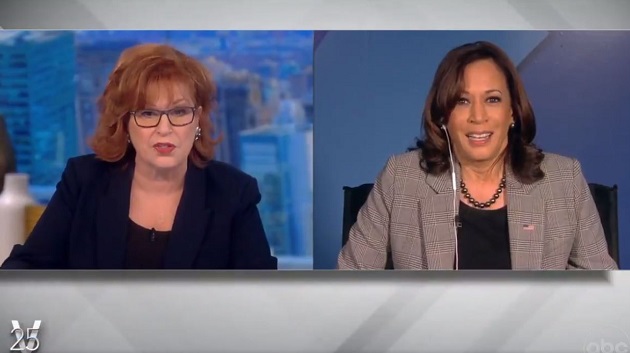 Harris, who was supposed to appear in-studio with the co-hosts of the show, instead appeared remotely from another room after Ana Navarro and Sunny Hostin were said to have tested positive.

Speaking with the two remaining co-hosts, Joy Behar and Sara Haines, the vice president said the treatment of Haitian migrants on the southwest U.S. border was “horrible and deeply troubling.”

“Human beings shouldn’t be treated that way,” Harris said. “And as we all know, it also evoked images of some of the worst moments of our history, where that kind of behavior has been used against the indigenous people of our country, has been used against African Americans during times of slavery.”

“This is going to be a major news story in a minute now,” Behar said when she first announced the news. “Sunny and Ana apparently just tested positive for COVID.”

Harris’ deputy press secretary, Sabrina Singh, said in a statement that the vice president “did not have contact with the hosts before the show” and that Harris’s Friday schedule would “continue as planned.”

But the interview was delayed for much of the show as producers and the U.S. Secret Service took precautions to make sure the vice president would remain safe.

When Harris did appear for her interview, she noted the effectiveness of the vaccines since the anchors did not appear to have any noticeable, or severe, symptoms.

“Sunny and Ana are strong women and I know they’re fine,” Harris said. “But it really does speak to the fact that they’re vaccinated and vaccines really make all the difference…”

Harris also answered questions about COVID-19, Afghanistan and abortion access — with sharp words about Haitians at the border.

When asked about asylum applications from migrants, she said she and Biden believe the administration has to do more to support Haiti itself.

“Haiti is our neighbor,” Harris said. “The United States has to help and we have to do more and our administration feels strongly about that.”

On Thursday, the U.S. Border Patrol announced it would put a pause on agents on horseback.

The president earlier this year tasked Harris with serving as his point person on stemming the flow of migration from Central America to the United States.

Earlier in the week, the vice president had condemned the ways Border Patrol agents were shown to be treating migrants.