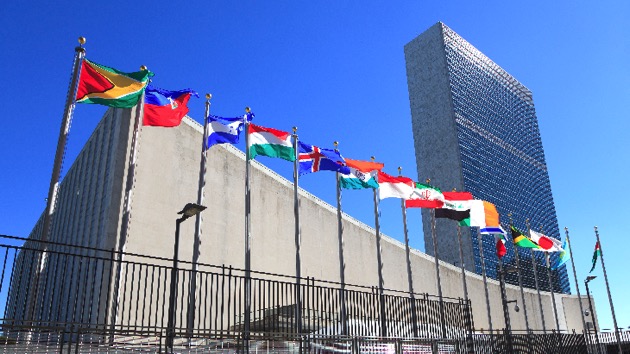 (WASHINGTON) — As President Joe Biden kicked off a week of global engagements amid tensions with some key allies, the White House previewed his speech to the United Nations General Assembly on Tuesday as one that will focus on turning the page from conflict to global cooperation and competition.

According to a White House senior adviser, the president’s remarks — one of his biggest opportunities to date to deliver his message on U.S. foreign policy — will “center on the proposition that we are closing the chapter on 20 years of war and opening a chapter of intensive diplomacy by rallying allies and partners and institutions to deal with the major challenges of our time,” including COVID-19, climate change, emerging technologies, rules of the road on trade and economics, investments in clean infrastructure, and a modern approach to counterterrorism.

Speaking to reporters Monday, the adviser stressed that Biden would also advocate for “vigorous competition with great powers, but not a new Cold War.”

White House press secretary Jen Psaki, during a press briefing on Monday, also said that the president will “reaffirm that the United States is not turning inward,” especially as the assembly follows closely on the heels of the withdrawal of U.S. and allied troops from Afghanistan..

“The president will essentially drive home the message that ending the war in Afghanistan closed a chapter focused on war and opens a chapter focused on personal, purposeful, effective intensive American diplomacy, defined by working with allies and partners to solve problems that can’t be solved by military force. And that require the cooperation of many nations around the world as well as non-state actors from the private sector and non-governmental organizations and international institutions,” the adviser said.

“This will be the central theme of his speech, which will really lift up some of these big hard challenges that will define the scope and shape of prosperity and security for the people of the United States and for people of the world in the years ahead. And he will reinforce the notion that our futures in our fortunes are really interconnected and bound up with one another. And so we all have to work together to cooperate in service of solving problems and seizing opportunities that lie before us,” the adviser added.

Given Biden’s key campaign pledge of restoring the standing of the U.S. on the world stage, the remarks could be a critical test. The speech is one part of a week that will see Biden focusing on global partnerships, amid tensions on the global stage in the wake of the AUKUS deal announced last week with Australia and the United Kingdom, aimed at curbing China’s influence on in the Indo-Pacific region. The deal angered the French by undercutting a sizable deal they had with Australia for nuclear-powered submarine technology.

“But what you’ll hear him talk about tomorrow is the president’s going to lay out the case for why the next decade will determine our future. Not just for the United States, but for the global community. And he will talk, and this will be a central part of his remarks, about the importance of re-establishing our alliances after the last several years,” Psaki said Monday. “I also think it’s important to note that establishing alliances doesn’t mean that you won’t have disagreements or you won’t have disagreements about how to approach any particular issue in the world.”

Administration officials also confirmed that Biden is currently working to find time to speak with France’s President Emmanuel Macron, clearly hoping to try and smooth things over with an important U.S. ally, after a diplomatic dustup over the submarine deal with Australia.

“The president wants to communicate his desire to work closely with France in the Indo-Pacific and globally, and to talk about specific practical measures that we can undertake together. We understand the French position, we don’t share their view in terms of how this all developed, but we understand their position. And we will continue to be engaged in the coming days on this,” the adviser said. “And we look forward to the phone call between President Biden and President Macron once its time is fixed on the books, we think that will be an important moment an opportunity for the two leaders to speak directly with one another.”

The White House also outlined the rest of the president’s week, including several engagements with world leaders both in New York and back in Washington following his remarks at UNGA.

In addition to his remarks, Biden will meet on Tuesday with Australia’s Prime Minister Scott Morrison, before returning to Washington to host a bilateral meeting with U.K. Prime Minister Boris Johnson.

On Wednesday, as has been previously announced, Biden will host a summit on COVID-19 to “rally the world urgently to work towards ending this pandemic as rapidly as possible and building our systems better to be able to handle the next pandemic,” the White House said.

“He believes that it is high time for the world to come together and not just national leaders. But he’s placing a heavy emphasis on international institutions, the private sector, non-governmental organizations, all of the actors who collectively have the capacity to beat COVID-19. And he is going to call for an all-hands-on-deck effort that can end this pandemic much more rapidly than if we allow for things to unfold without the kind of focus sustained energy and effort that is required,” the official previewed of the summit.

The United States will also have a series of announcements about our own further contributions beyond what we’ve already contributed to ending the pandemic globally, according to the senior administration official.

On Friday, in addition to the first in-person meeting of the Quad countries (India, Japan, Australia and the U.S.) in Washington, Biden will hold individual meetings with India’s Prime Minister Narendra Modi, as well as Prime Minister Yoshihide Suga of Japan.