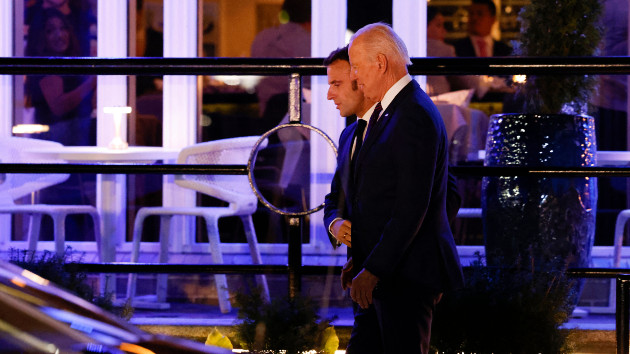 (WASHINGTON) — The White House is rolling out the red carpet on Thursday as President Joe Biden hosts French leader Emmanuel Macron for the first state dinner of Biden’s administration.

The president and first lady Jill Biden, as well as Vice President Kamala Harris and second gentleman Doug Emhoff, will welcome President Macron and his wife, Brigitte, on Thursday night. The state dinner will take place on the South Lawn in a candlelit pavilion.

“The design of this dinner was inspired by the shared colors of our flags — red, white and blue — and our common values: liberty and democracy, equality and fellowship,” Jill Biden said Wednesday as she previewed the event. “These form the bedrock upon which our enduring friendship was built.”

The diplomatic tradition, put on hold for the past several years due to COVID-19, will highlight the crucial partnership between the U.S. and France, administration officials said.

“This visit really largely serves as a celebration of the strong footing of this relationship, one that is well rooted in our history, from the very beginnings of our country,” White House spokesman John Kirby told reporters this week ahead of Macron’s arrival.

Kirby said France has been a “vital global partner” on a number of issues, from providing support to Ukraine against Russia’s invasion and confronting challenges posed by China. Those issues are expected to be front and center of the discussions between President Biden and Macron, senior administration officials told reporters.

But the bilateral relationship has also been fraught at times, including last year when Australia canceled a massive, multibillion-dollar submarine deal with France in exchange for a partnership with the U.S and the U.K.

More recently, French officials and other European leaders have raised concerns about climate and energy provisions included in the sweeping Inflation Reduction Act, specifically the tax subsidies for American-made technologies related to renewable energy, like components for electric vehicles. European Union leaders have said the subsidies may break the rules of the World Trade Organization and will have negative side effects for their economies.

Senior Biden administration officials, in a call with reporters ahead of the state dinner, dodged questions about any strain between the two nations. On the Inflation Reduction Act (IRA), Biden officials touted a task force that has been discussing these issues with the Europeans as smoothing things over.

“I think it’s been a very constructive set of conversations that you know, is ongoing, between us and our partners in the in the [European Union], like I said, both with respect to their articulation of the challenges that they feel they face as a result of the IRA, as well as our articulation of some of the opportunities that we think the IRA provides,” an official said.

A French official, speaking to reporters ahead of the state visit, said France broadly welcomed the legislation since it’s “absolutely essential” for the U.S. to work toward meeting its climate goals, but the official said it’s important for the two nations to “resynchronize” their economic policies and “avoid a divergence.”

Other topics Macron planned to focus on, the official said, include strengthening African economies and promoting the teaching of French language in schools.

Macron, France’s president since 2017, was also the first foreign leader that then-President Donald Trump invited for a state visit. The two at first had a cordial relationship that turned sour over policy differences on issues like the Paris climate accord and the Iran nuclear deal.

The U.S. and France agreed late last year to cooperate on space and in other realms, and on Tuesday Macron thanked Harris for the ongoing commitment.

“I do believe, indeed, space is a new place for conflictuality,” Macron said, warning there are “crazy players” and “rogue states” and “hybrid attacks.”

“And I think it’s very important, together — because we do share this history,” Macron said. “We do have the same commitment and attachment to science and progress. But we do share, as well, the same democratic values.”

In addition to meeting with Biden, Macron on Thursday will go to Capitol Hill for a discussion with bipartisan leadership in the House and Senate.

On Friday, he’ll travel to New Orleans to meet with state leaders and the Francophone community, participate in a cultural event, meet with local companies involved in the transition to renewable energy and promote French language instruction in under-served communities in Louisiana, French officials said.

On Wednesday night, the Macrons and Bidens dined together at an Italian seafood restaurant in Washington’s Georgetown neighborhood, Fiola Mare.