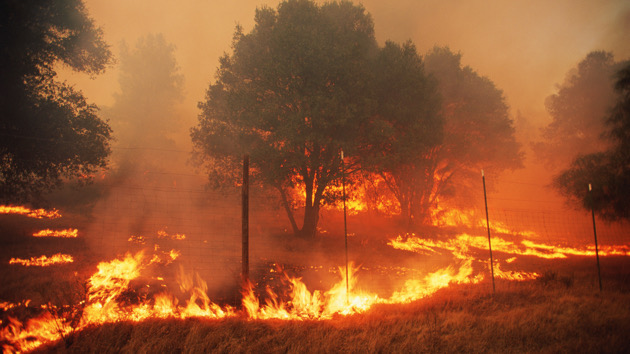 (SISKIYOU COUNTY, Calif.) — A fire burning out of control in a Northern California national forest and threatening a town of nearly 8,000 people has quickly become the largest wildfire in the state this year, officials said.

The McKinney Fire in the Klamath National Forest in Siskiyou County, near the Oregon border, had burned 55,493 acres and was 0% contained as of Monday morning, according to Cal Fire.

The blaze grew by nearly 3,000 acres overnight as gusty winds helped fan its spread through a drought-dry tinderbox of high grass, brush and timber, according to Cal Fire.

Two people were found dead in their car in a driveway in the town of Klamath River, Siskiyou County Sheriff Jeremiah LaRue told ABC News. Firefighters said they suspected that the two were caught in the fast-moving fire as they tried to flee, according to the sheriff. More rescue teams were expected to search the area on Monday.

The fire started around 2:15 p.m. Friday in the Klamath National Forest and has caused the closure of Highway 98 in the area and the evacuation communities, including the partial evacuation of Yreka, California, officials said.

The blaze is burning through drought-dry tinderbox of high grass, brush and timber and its rapid spread has been fanned by gusty winds and numerous dry-lightning strikes, according to Cal Fire.

There was concern that lightning storms over the fire area could have sparked additional fires, officials said. But that same storm system also carried a significant amount of moisture, slowing the fire’s spread significantly over the past 24 hours, the sheriff said on Monday.

“We’re feeling pretty good” about protecting Yreka, whose western fringes were threatened by the fire, he told ABC News.

The Siskiyou County Sheriff’s Office told ABC News Sunday afternoon that more than 100 structures have been destroyed, including the homes of several deputies who are continuing to work despite personally being under evacuation orders.

The Jackson County Sheriff’s Office said search crews rescued about 60 hikers from a section of the Pacific Crest Trail, a popular backpacking trail that runs from Canada to Mexico.

Sgt. Shawn Richards of Jackson County Search & Rescue told reporters the hikers were not in immediate danger. He said that because of the rapidly spreading fire, unpredictable winds and smoke reducing visibility to roughly 20 feet, the decision was made to rescue the hikers before conditions worsened.

Red flag fire danger warnings were issued in the area Sunday as temperatures, according to the National Weather Service, are forecast to reach 90 to 100 degrees. In addition, there is a 30% chance of thunderstorms moving in Sunday afternoon, according to the weather service.

“Strong gusty outflow winds will continue to be the drivers for the extreme fire behavior,” Cal Fire said in its latest incident report on the fire.

At least 568 firefighters are battling the blaze on the ground and from the air with helicopters and air tankers.

“Really erratic winds from the start of the incident all the way up until now,” Kelsey Lofdah, a firefighter for the U.S. Forest Service, told ABC San Francisco station KGO-TV of challenging firefighting conditions. “Pretty extreme fire behavior throughout the entire shift.”

The Yreka Police Department issued evacuation orders for a neighborhood in the western part of the town “due to its proximity to the fire” about 12 miles away.

The police department also issued evacuation warnings to residents in all areas of the community west of Interstate 5.

The cause of the fire is under investigation and emergency management officials are assessing the damage.

Californian Gov. Gavin Newsom proclaimed a state of emergency on Saturday for Siskiyou County due to the effects of the McKinney Fire. A state of emergency frees up more state resources to be used in battling the blaze, including dispatching more firefighters and equipment to the scene.

The McKinney Fire surpassed the Oak Fire in Mariposa County near Yosemite as the largest wildfire in the state this year, according to Cal Fire. The Oak Fire, which started on July 22, was 64% contained on Sunday after burning 19,244 acres and destroying 182 structures, including more than 100 homes, officials said.